Let's look at the pretty pictures! Here are some fresh parts from Mouser: 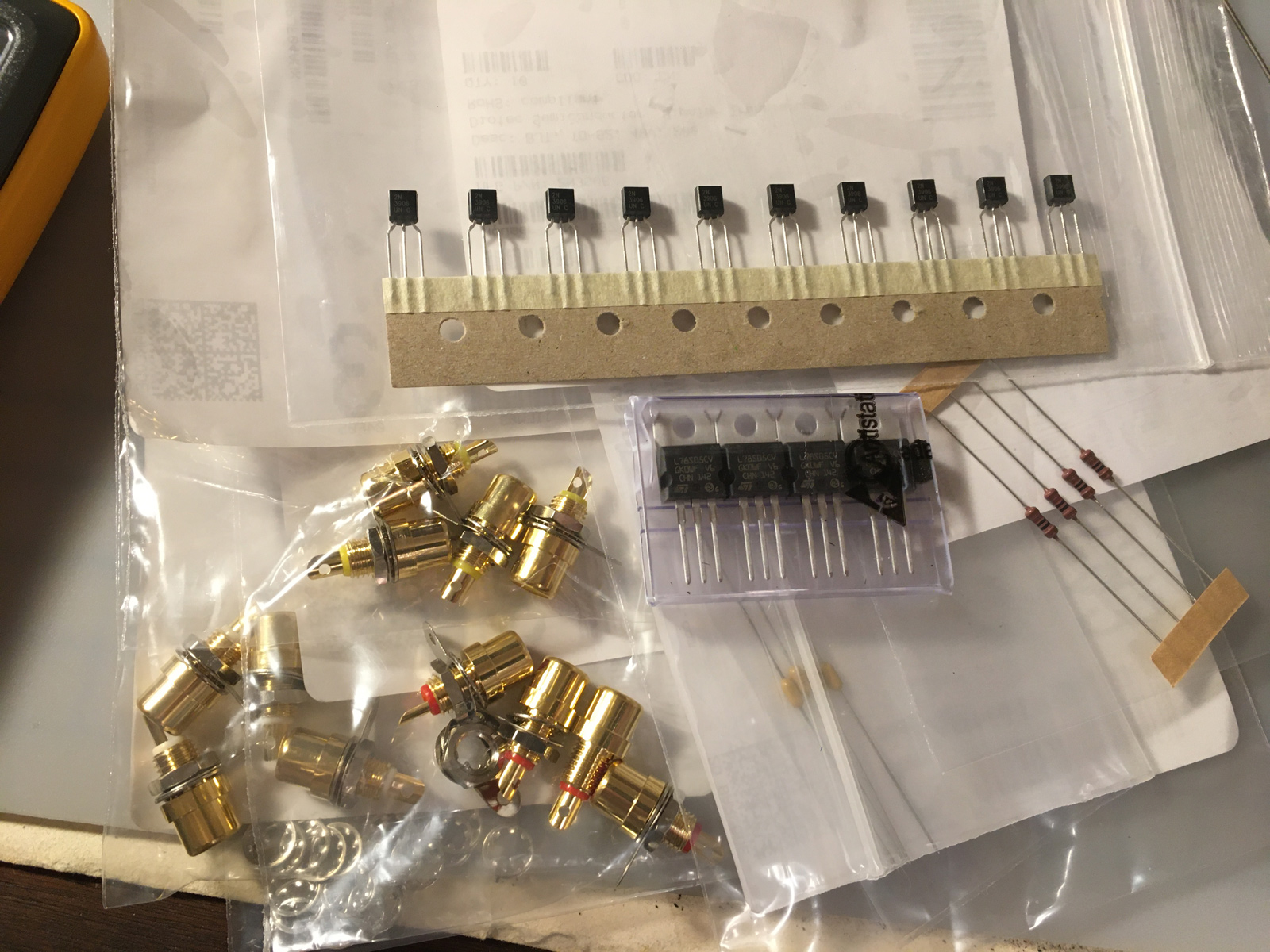 I may not use the RCA jacks... I'm more inclined to use the short "pigtail" type cables I used on my own 2600 as well as John's. You just plug them into your monitor's (or AV system's) cables using barrel connectors, saving wear-and-tear on 40-year-old brittle plastic. But I figured I'd buy the jacks anyway, just in case I decided to go that route. It's not like John's 7800 doesn't already have a gazillion holes in it (gratuitous JB Weld action, coming soon). 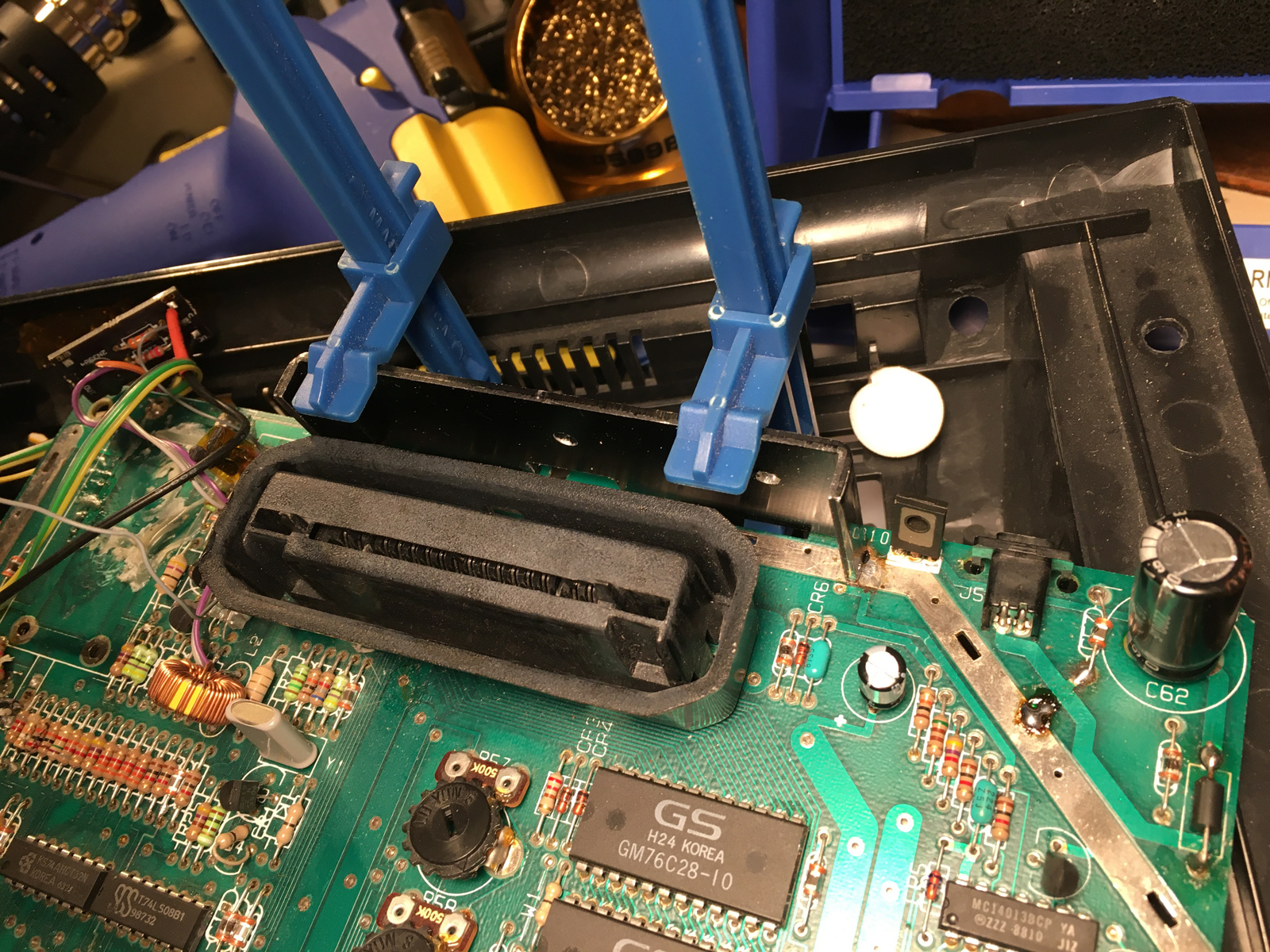 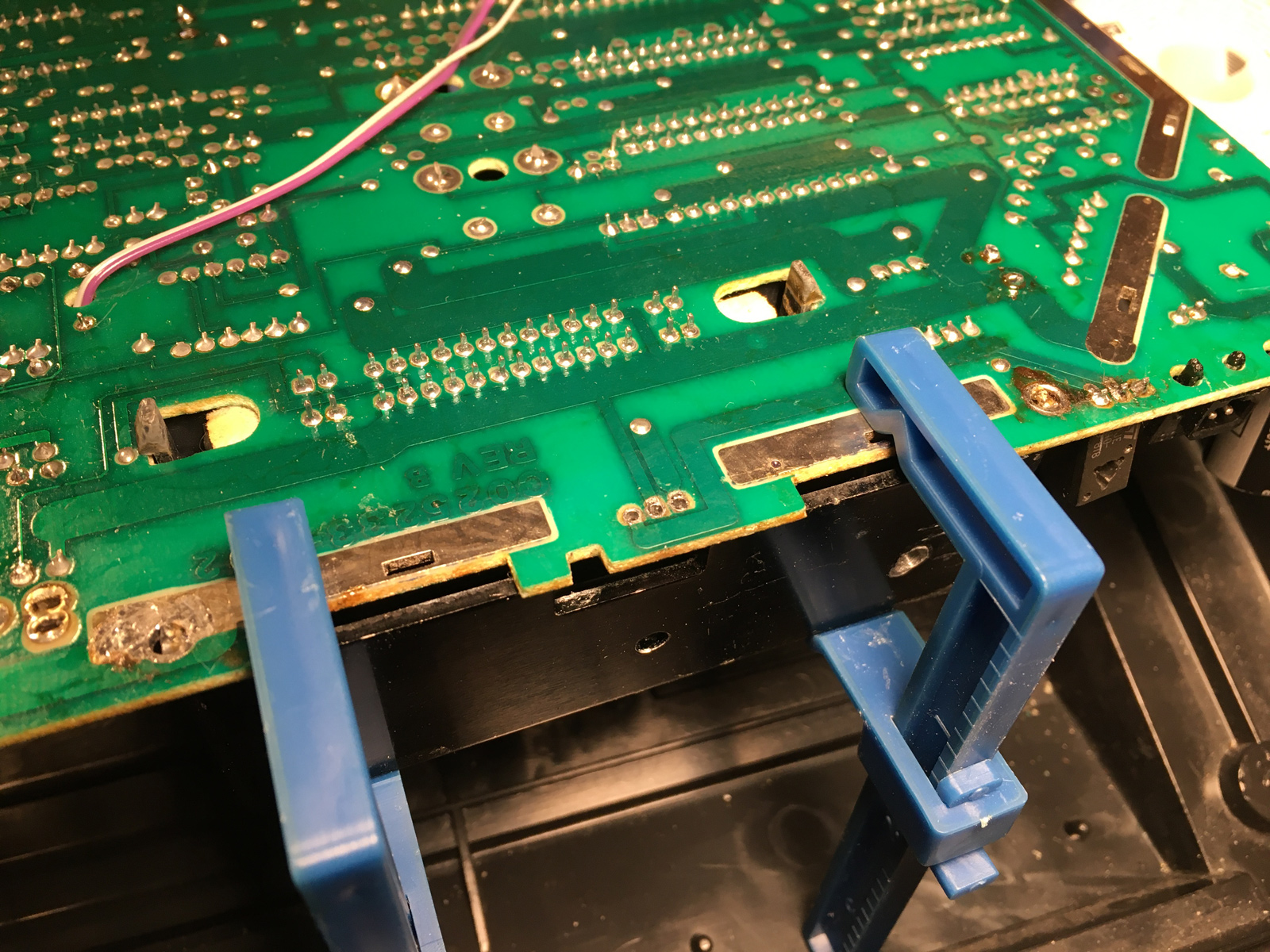 Then I swapped out my soldering iron tip for a big ol' honkin'-sized one, and gave it what-for, until the heat sink was firmly in place again: 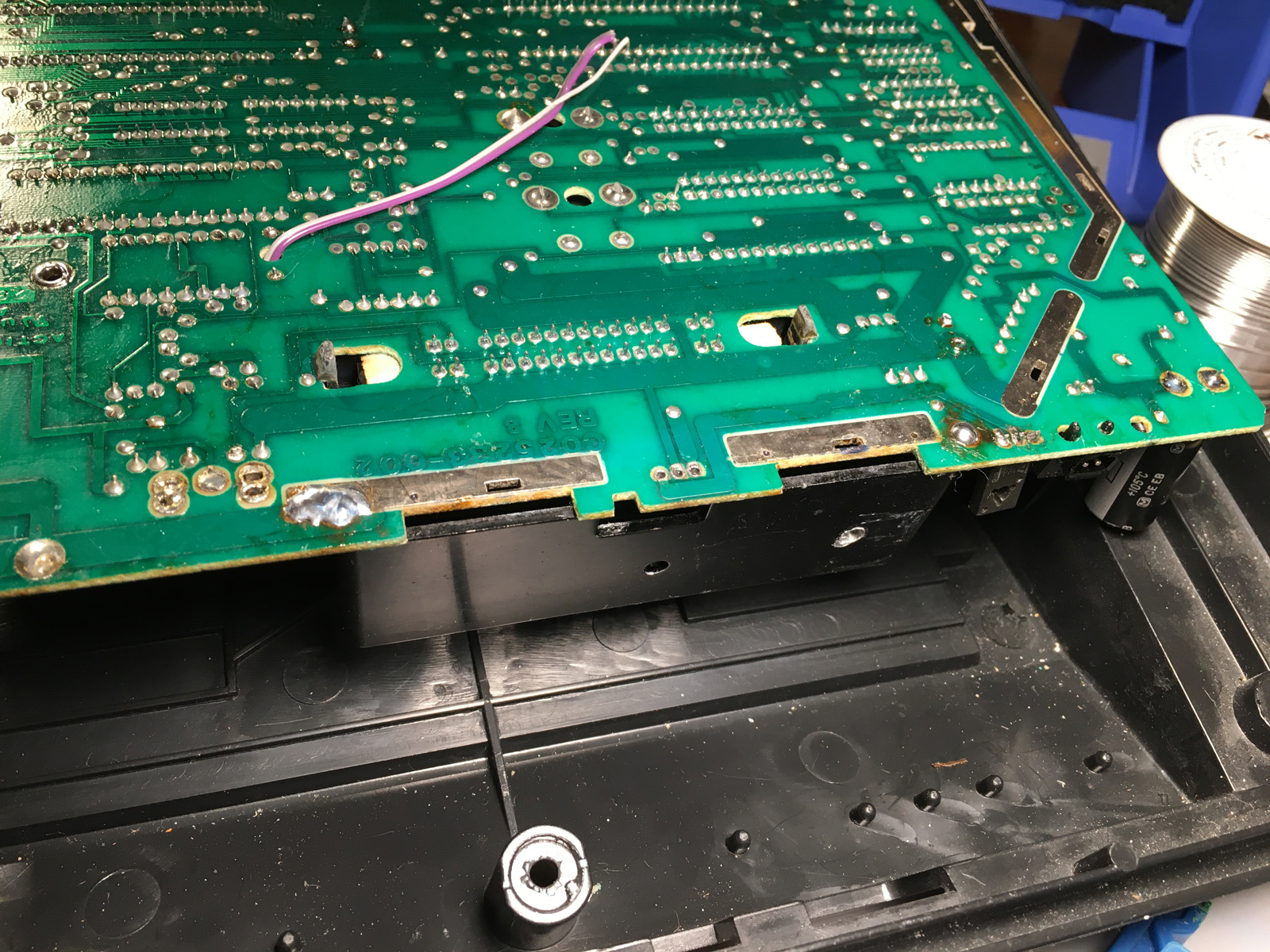 Of course, I had to wait for my soldering iron to cool back down before I changed tips again. How do I know when it's safe to do so? With a cool toy! (Thank you, Amazon Prime Day.) 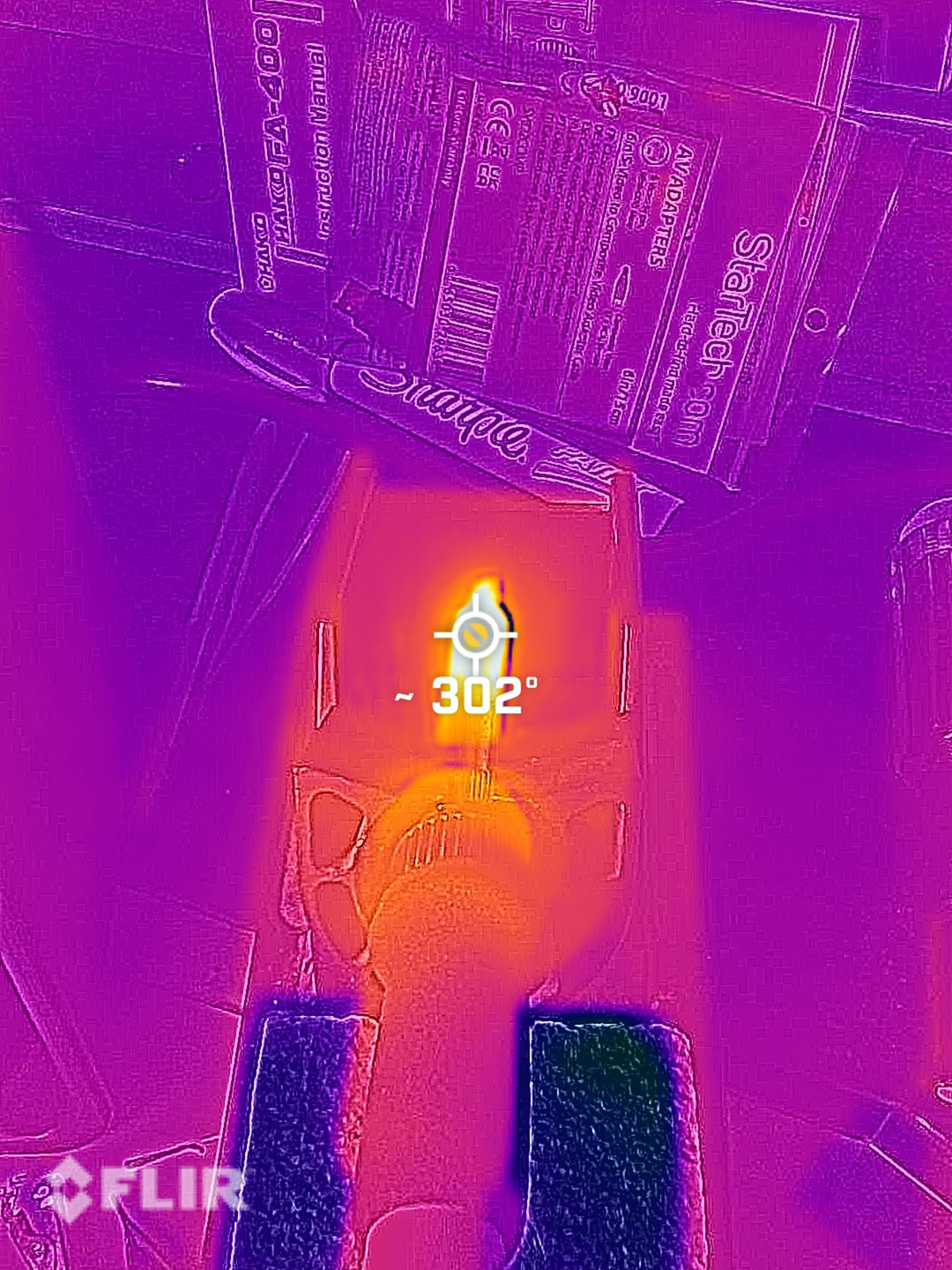 I should really take some pics of the interior of the 7800 while it's running. That would be cool. Or hot. Or something.

With the heat sink anchored, I installed a fresh voltage regulator: 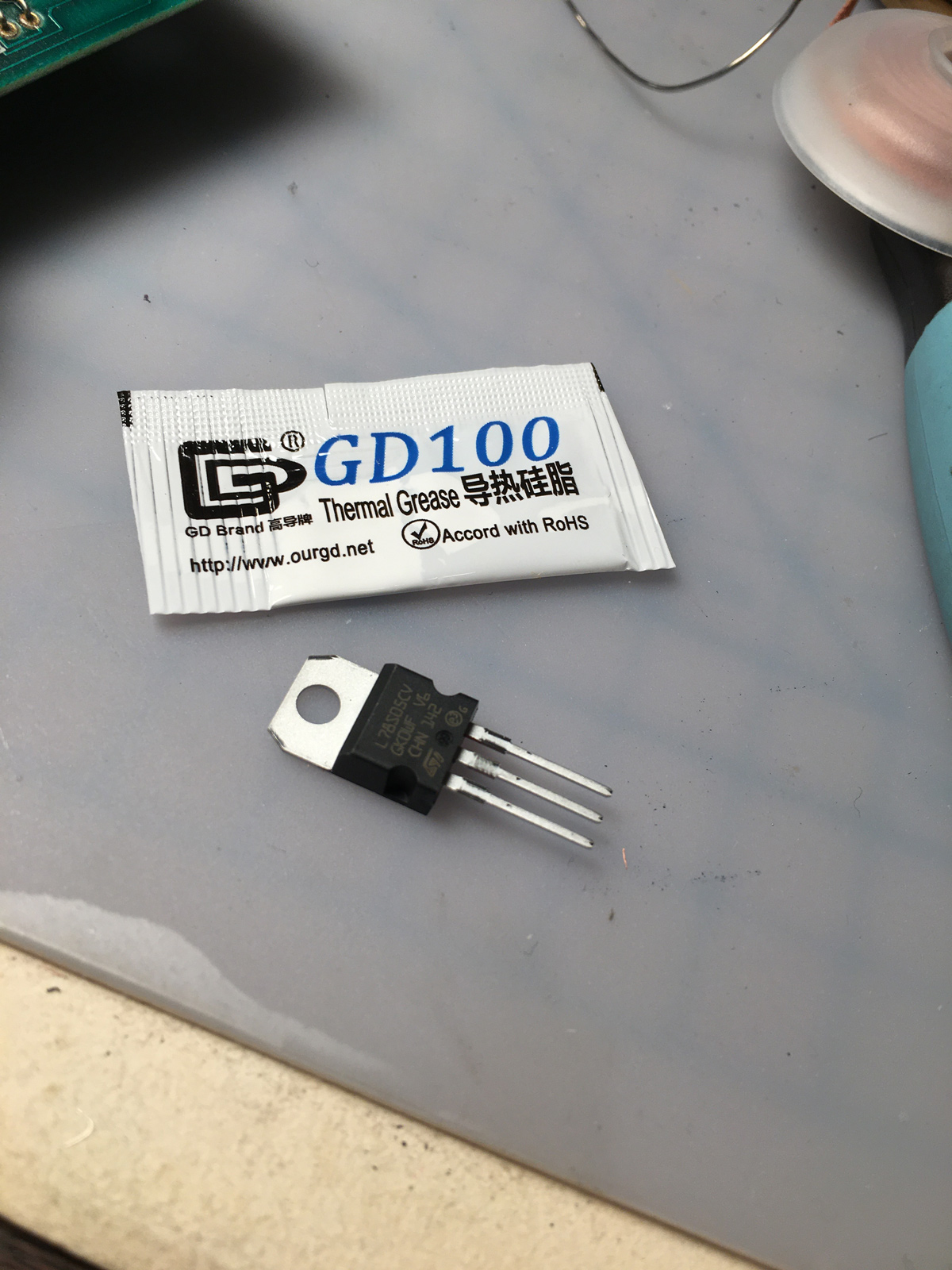 All done, and rock-solid! 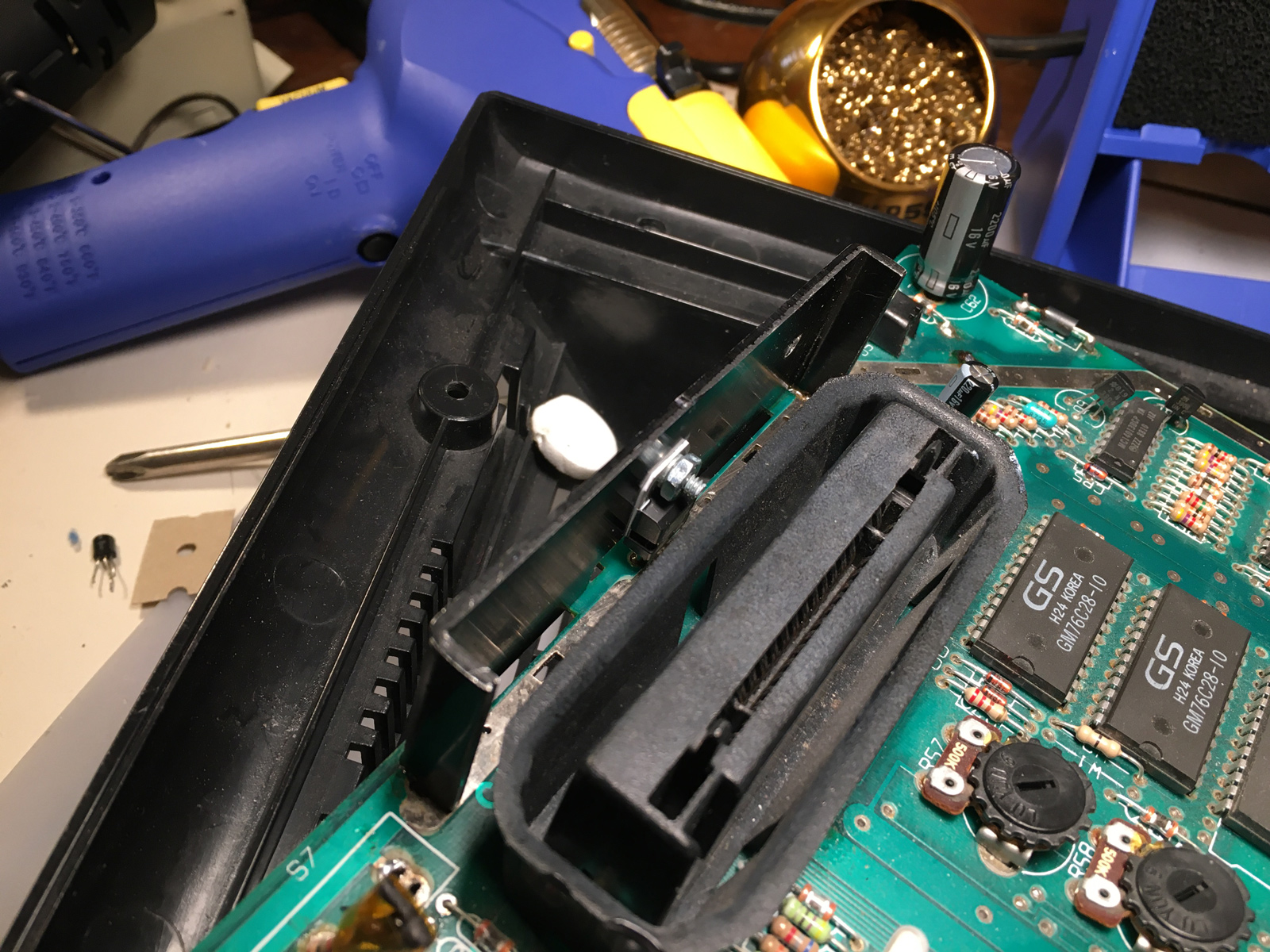 I also replaced the two bad transistors, and while I was at it, replaced the other 2N3906 for good measure. A quick test showed that this did indeed fix the joystick issue. 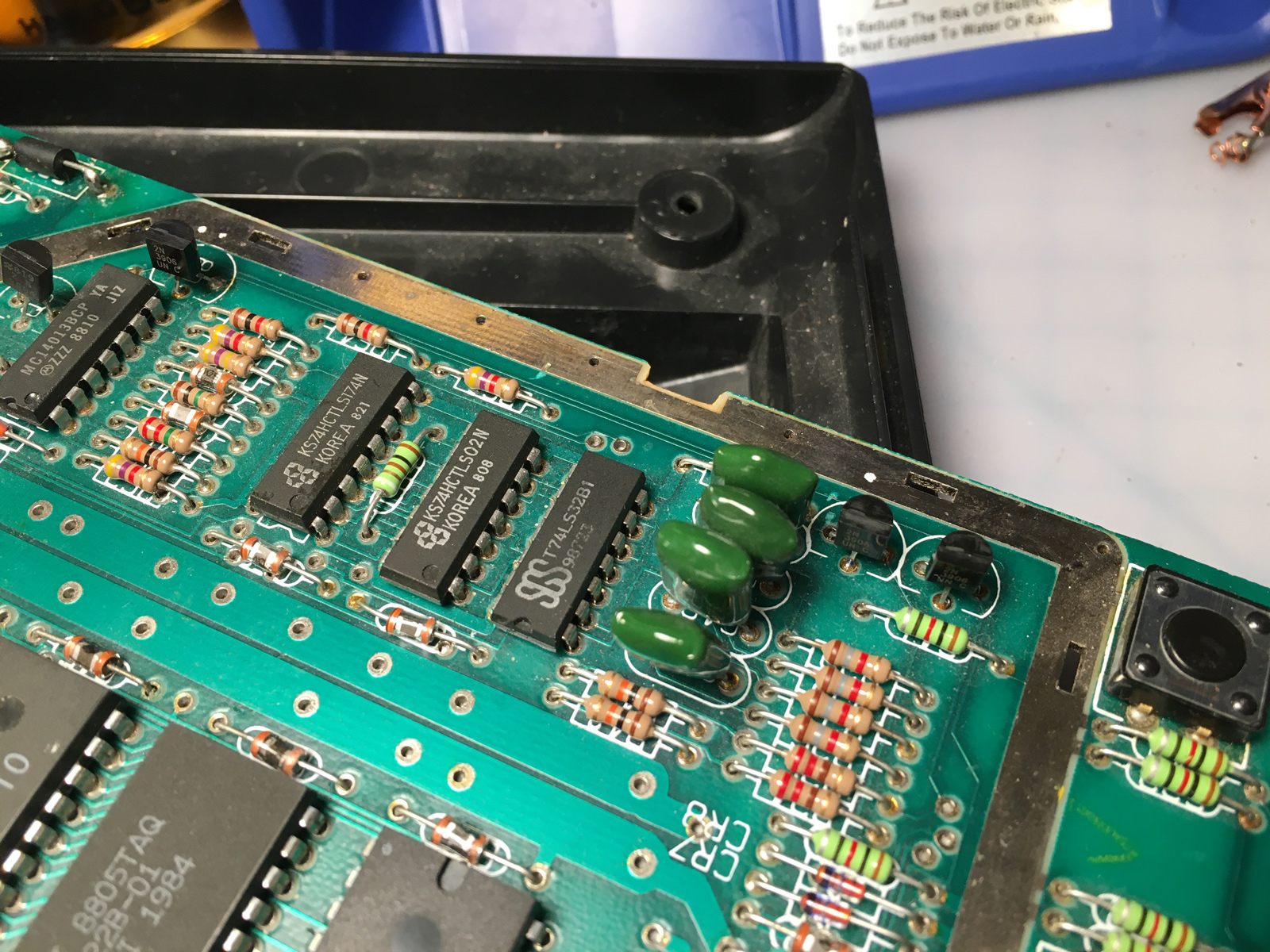 So with the console now properly working, it was time to rip out the rest of the composite + audio mod. Snip-snip-snip! 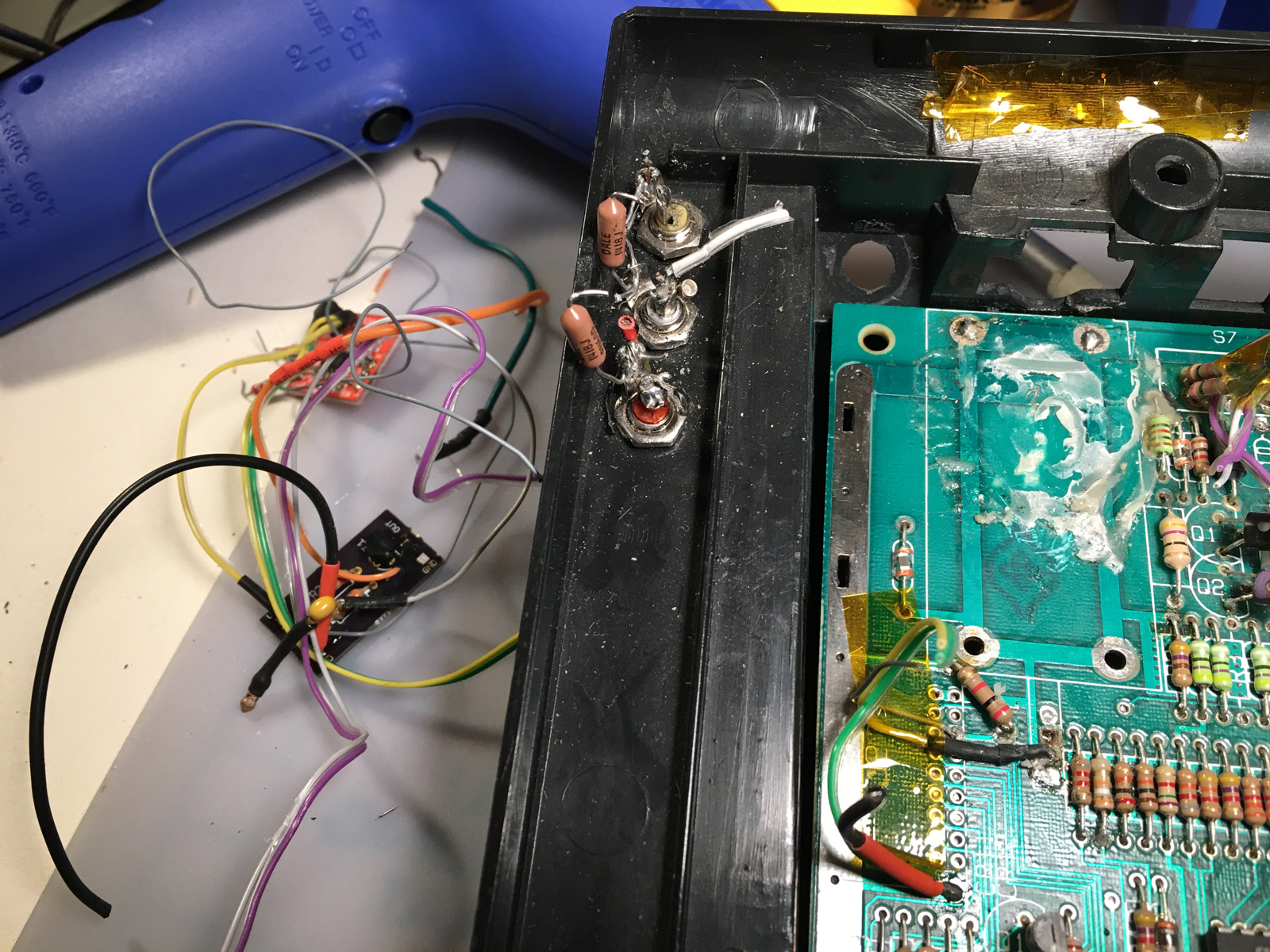 I also took this opportunity to clean all of that adhesive gunk off of where the HDMI connector had been glued down in place of the RF modulator. What an icky mess that was to get through! 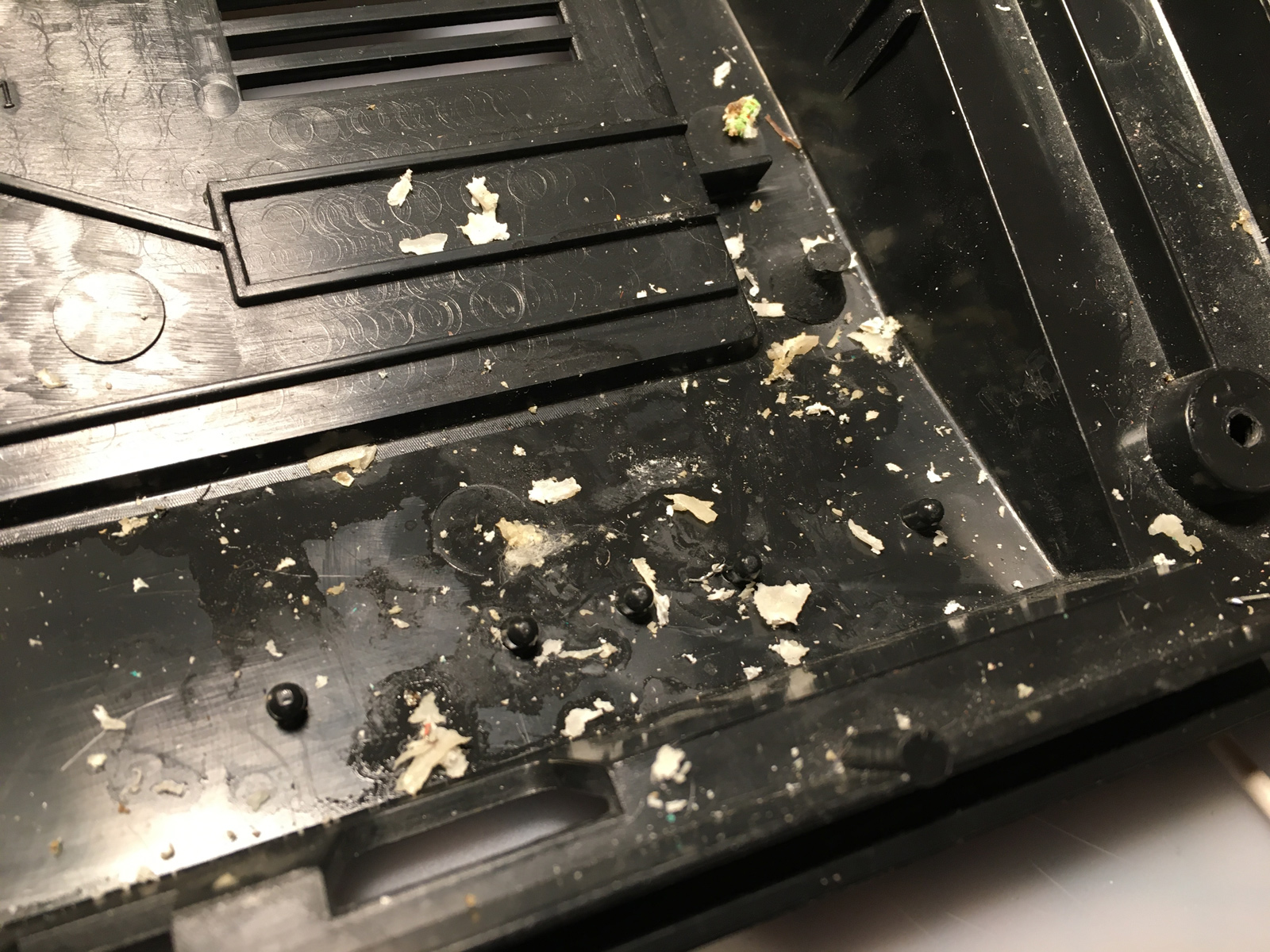 Unfortunately, there was some collateral damage... capacitor C3 was caked in the gunk, and I couldn't remove one without destroying the other... 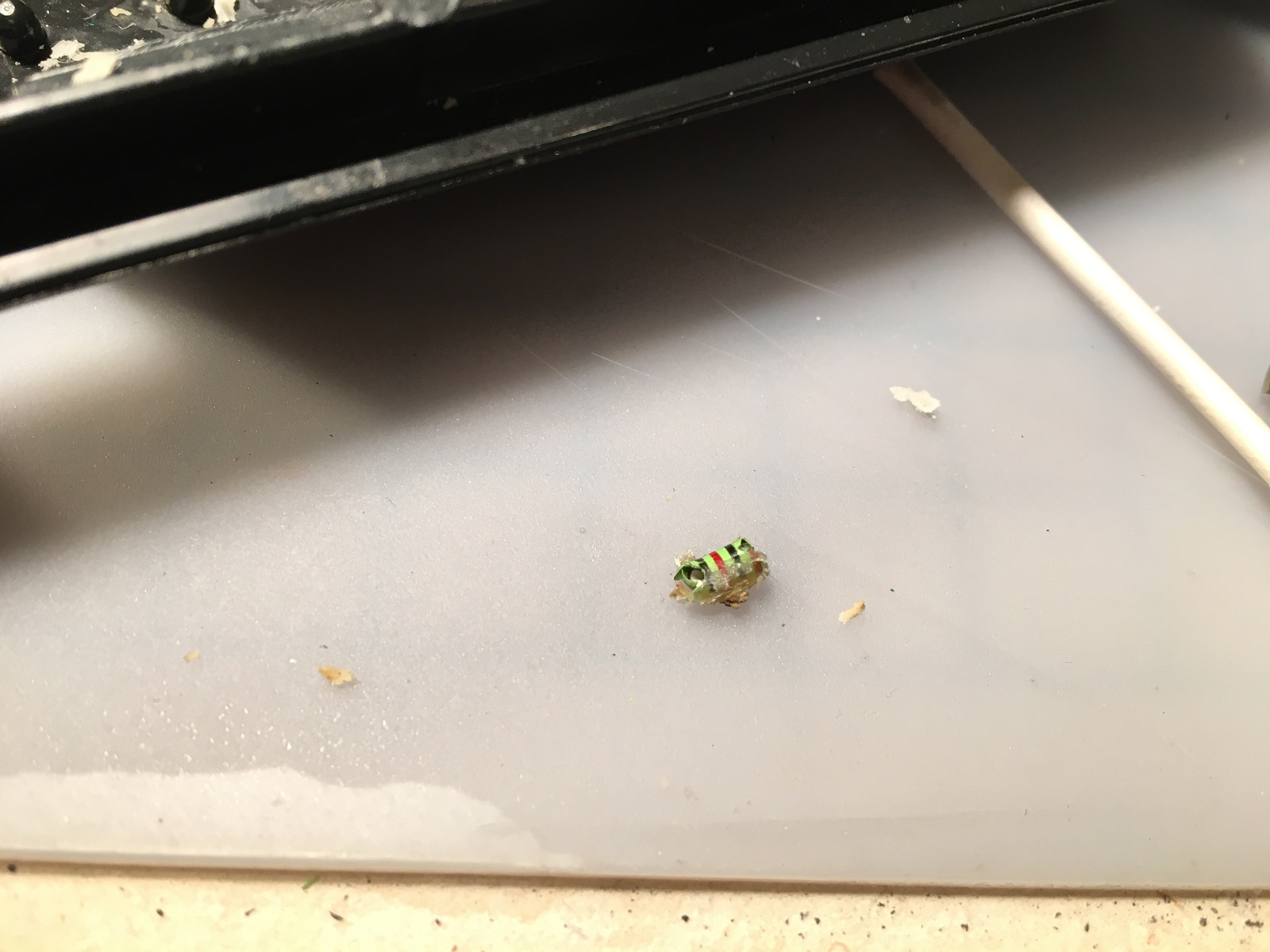 But I did get the gunk off. At least everything that could come off without ruining the circuit board:

And the old mod was finally, fully removed: 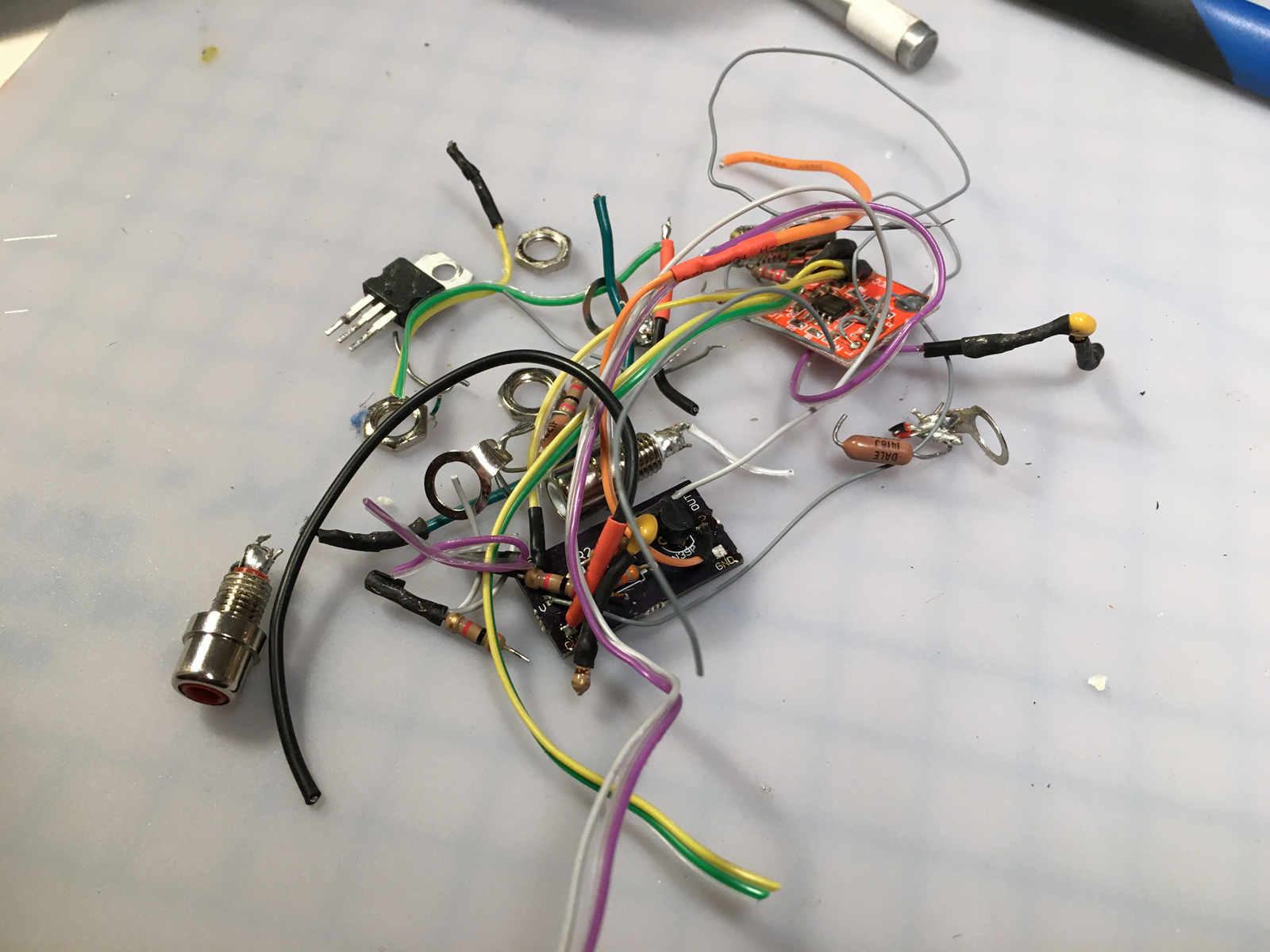 Now then... to find a replacement capacitor. I didn't really want to place another order just for one thing. Fortunately, according to schematics in the Atari 2600 Field Service Manual, there are a bunch of 1nF (.001µf) caps used on the 2600A. 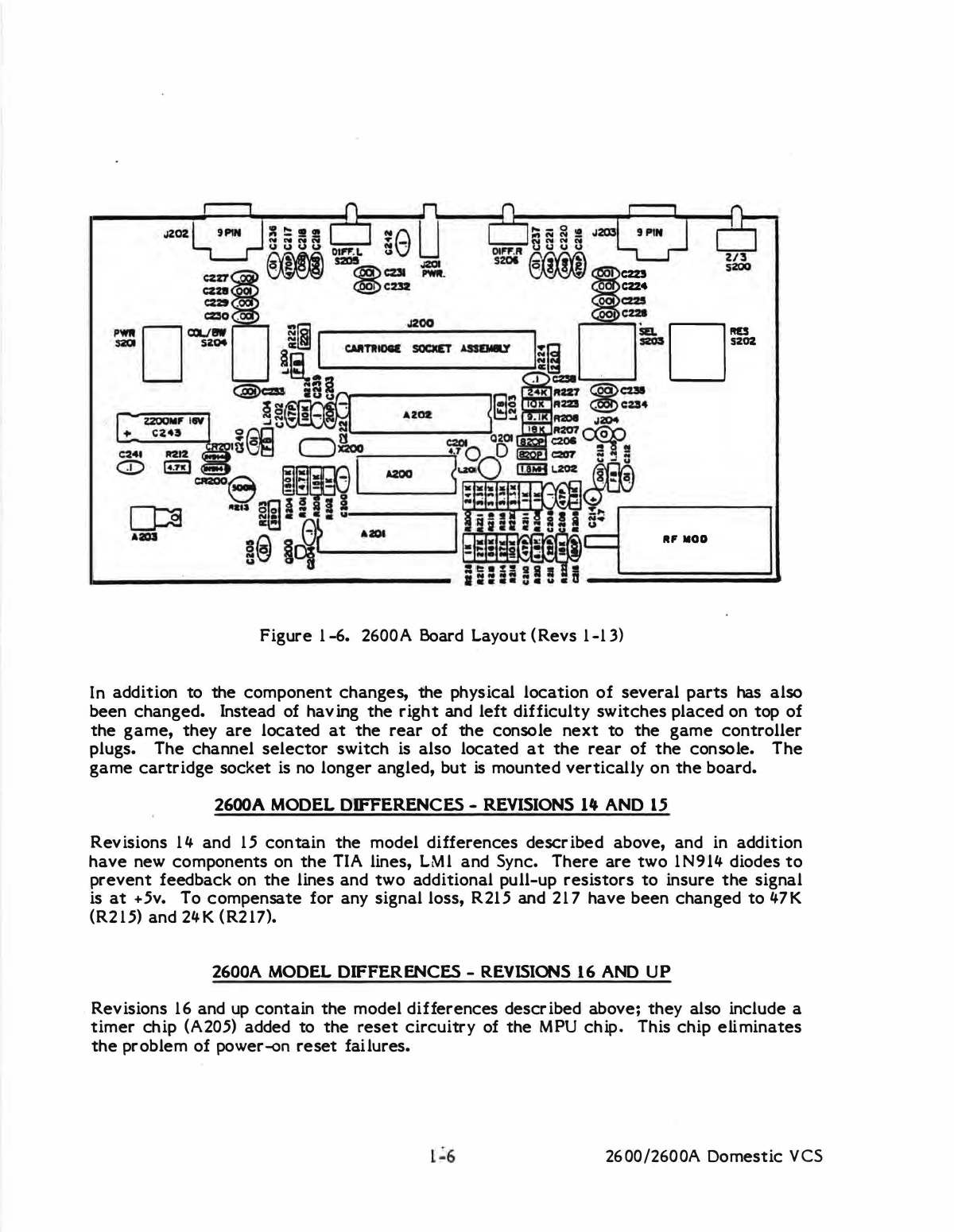 So I dug out a couple of spare boards. This board only had ceramic radial .001µf caps, which don't have very long leads, but I grabbed one anyway. Plus, this still had a variable inductor for tweaking audio on it - just what I needed to replace the choke that had been ham-fistedly added to the 7800. Score! 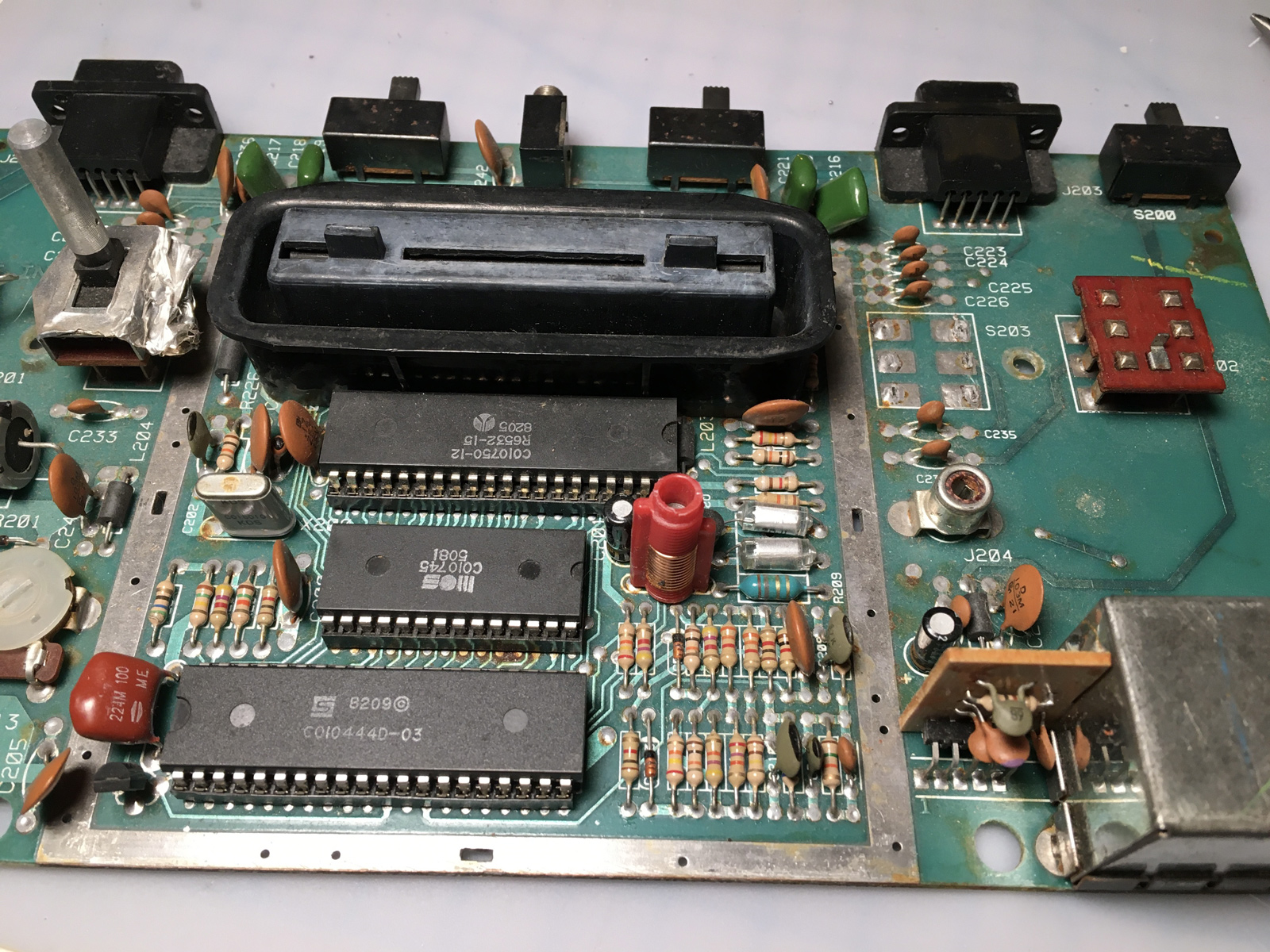 This donor had axial capacitors - so I grabbed one of those as well. The stuff at the lower right... not my doing. This was sent to me as something to add to my Mods Comparison Page umpteen years ago. It never got added. But the parts have come in handy. 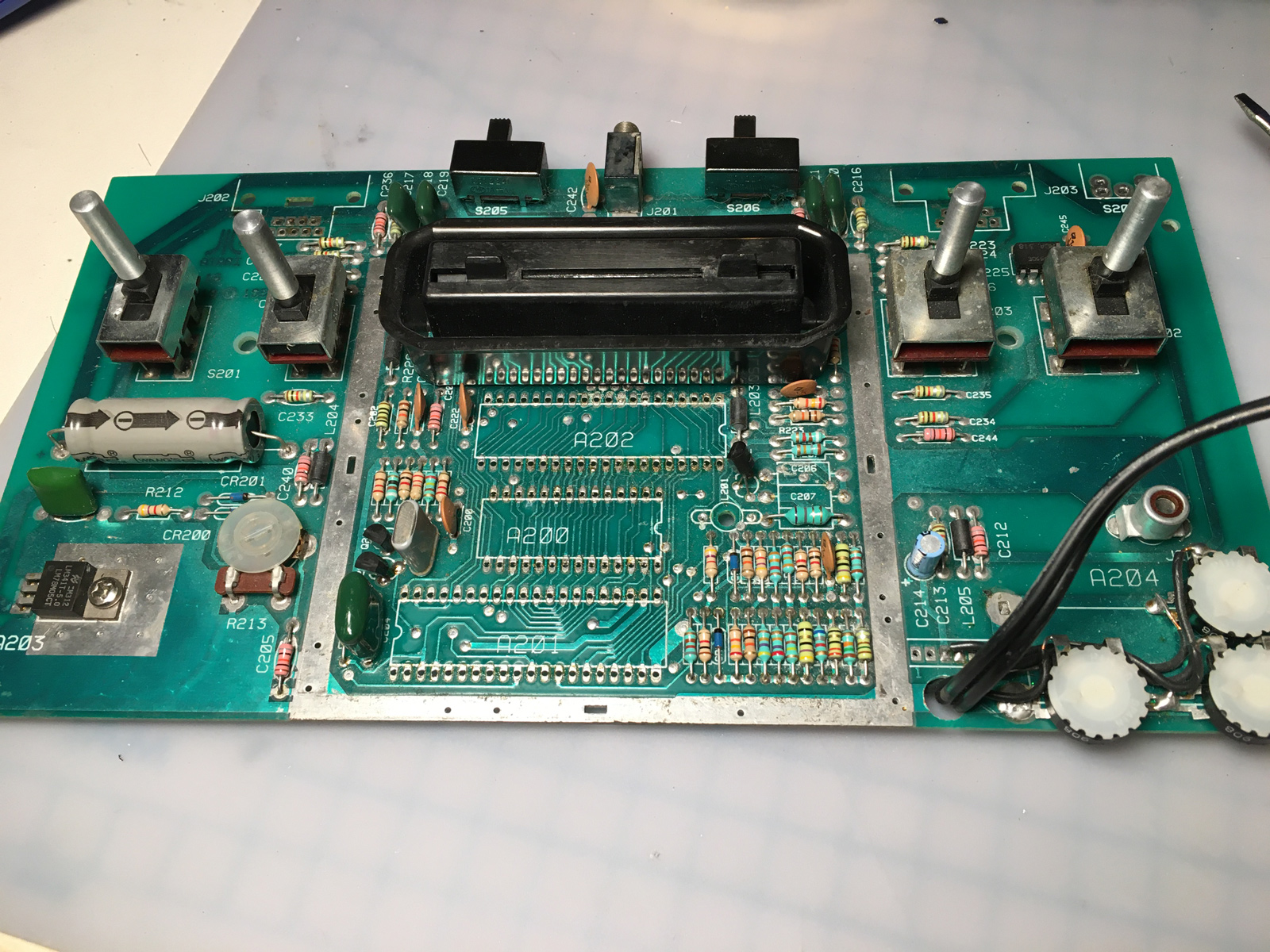 So, here are the two potential replacement caps. Let's see how they actually test out! (Yes... I could just try to decipher the color coding.) 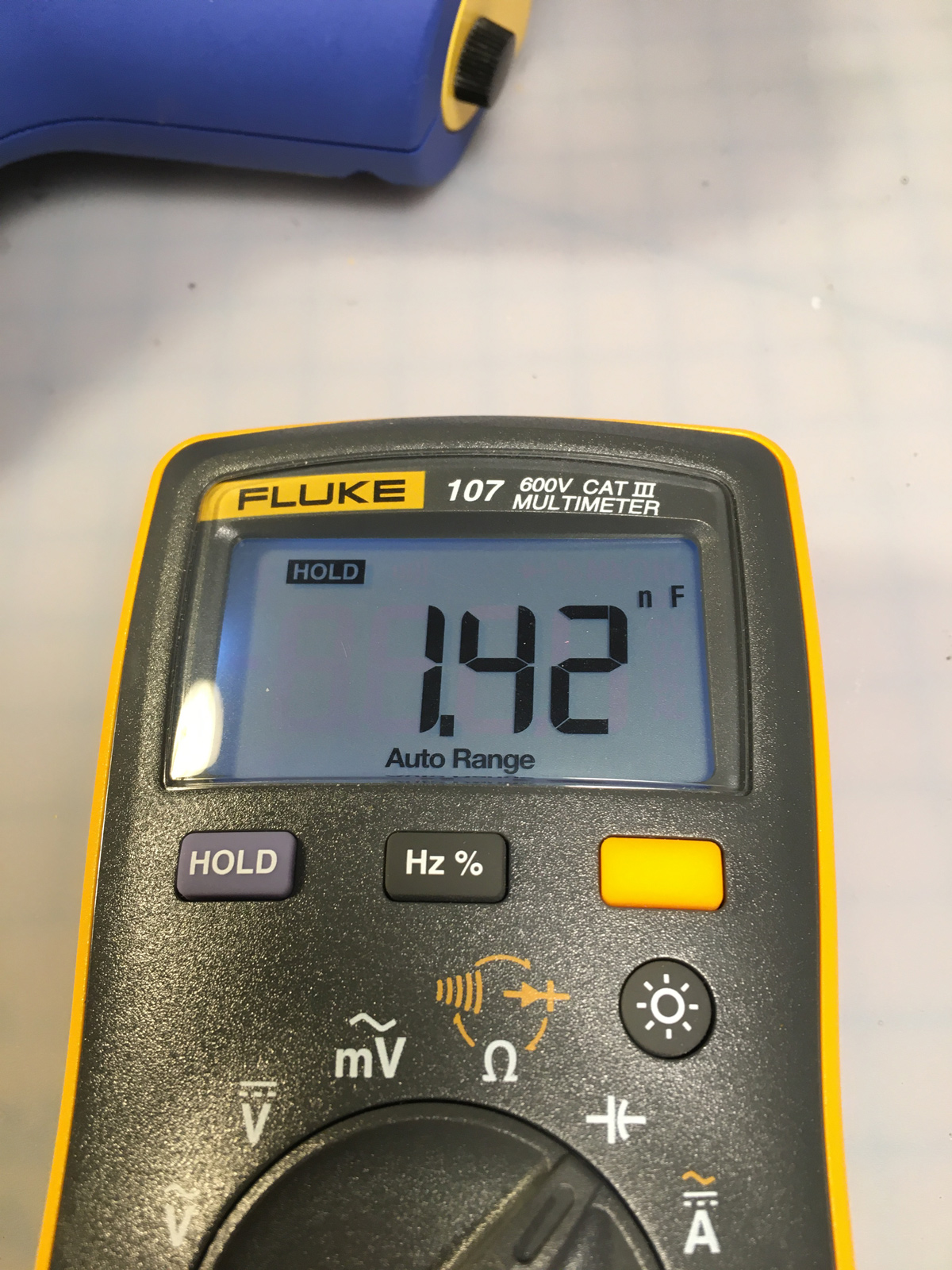 The radial one, even less so: 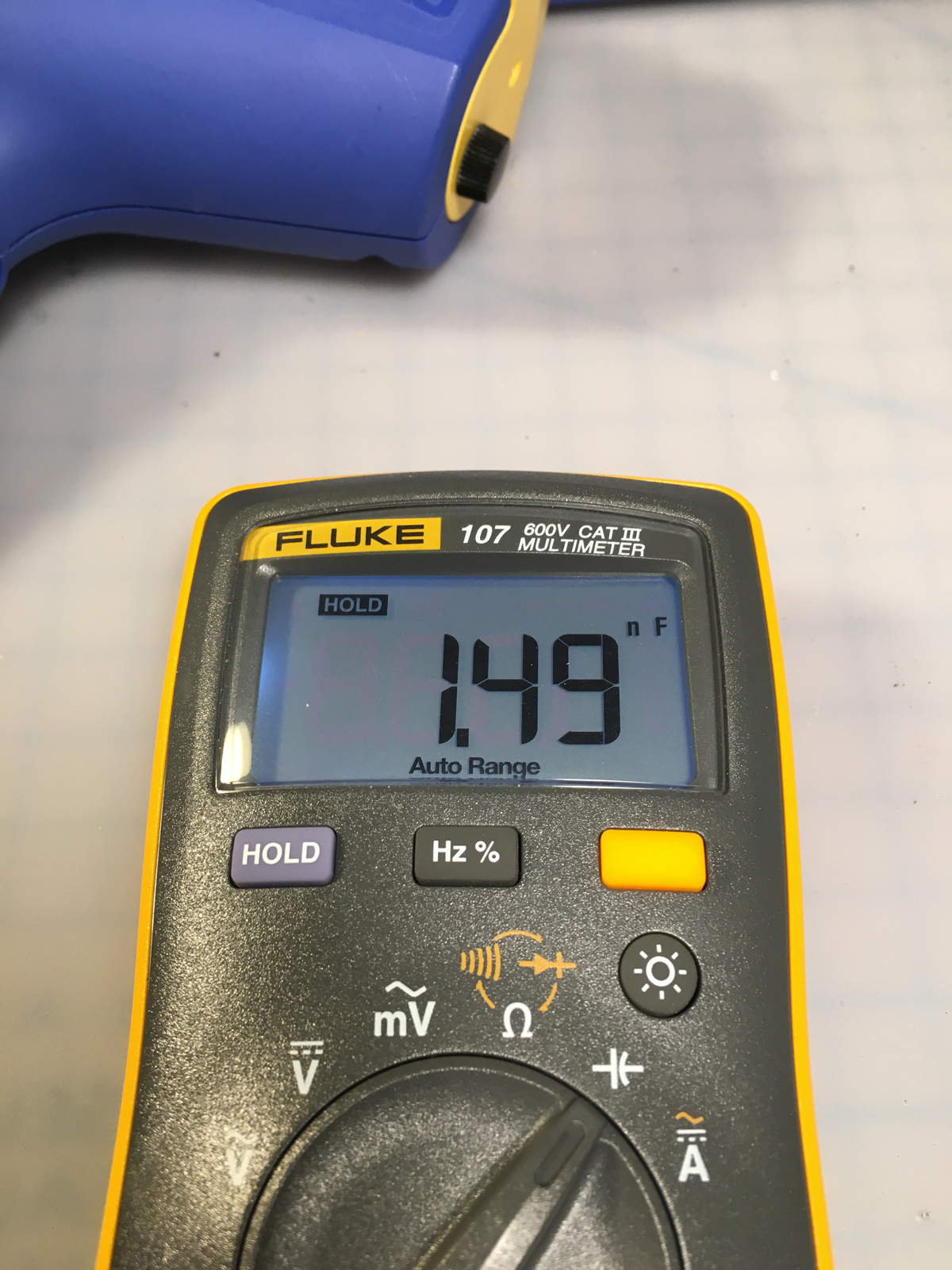 Fortunately, I had some spare caps in a bag o' parts lying around. After some testing, I found these which were pretty close. 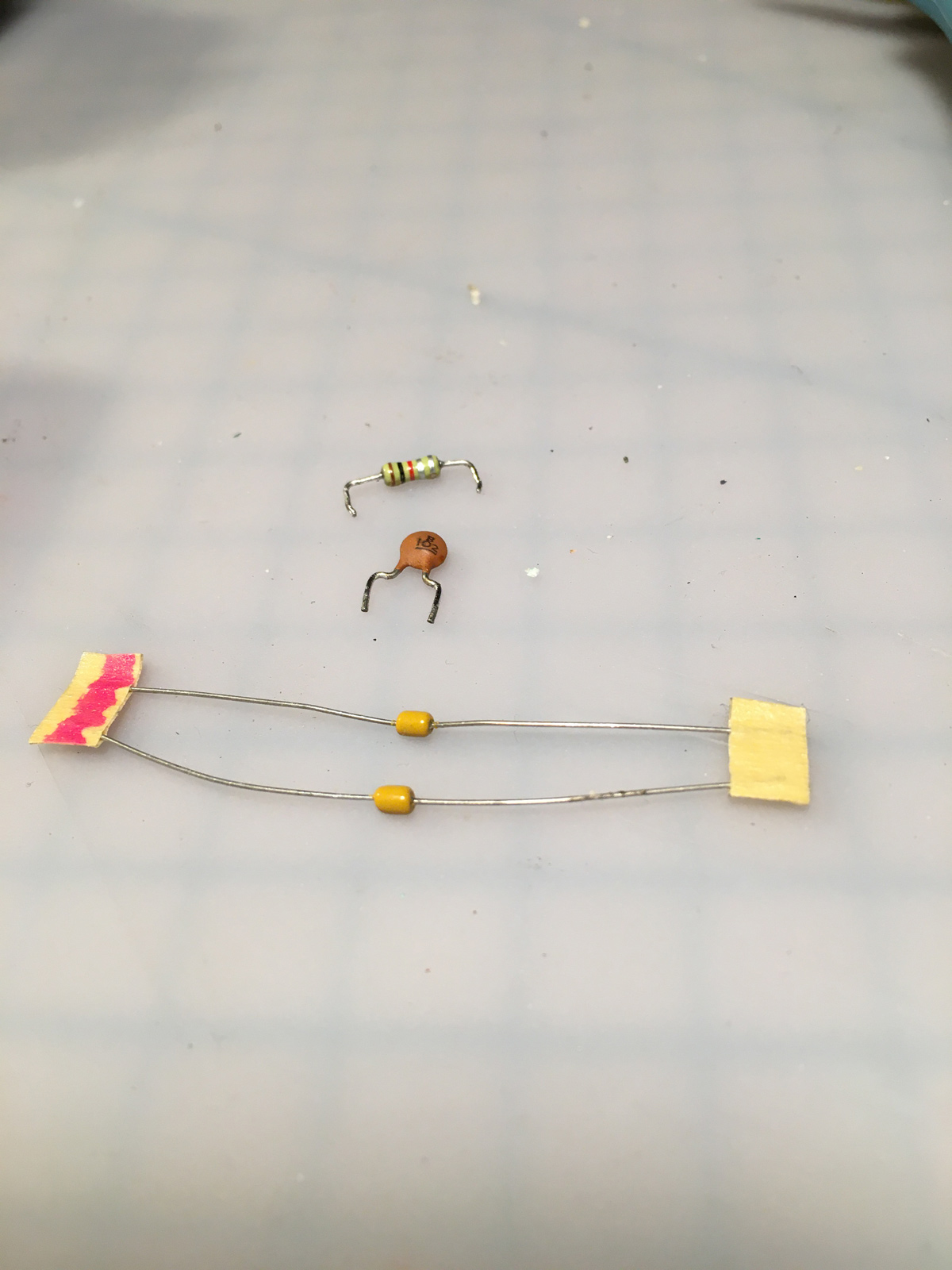 Close enough! (Hopefully. If in the end it needs replacing, I'll order a proper part.) 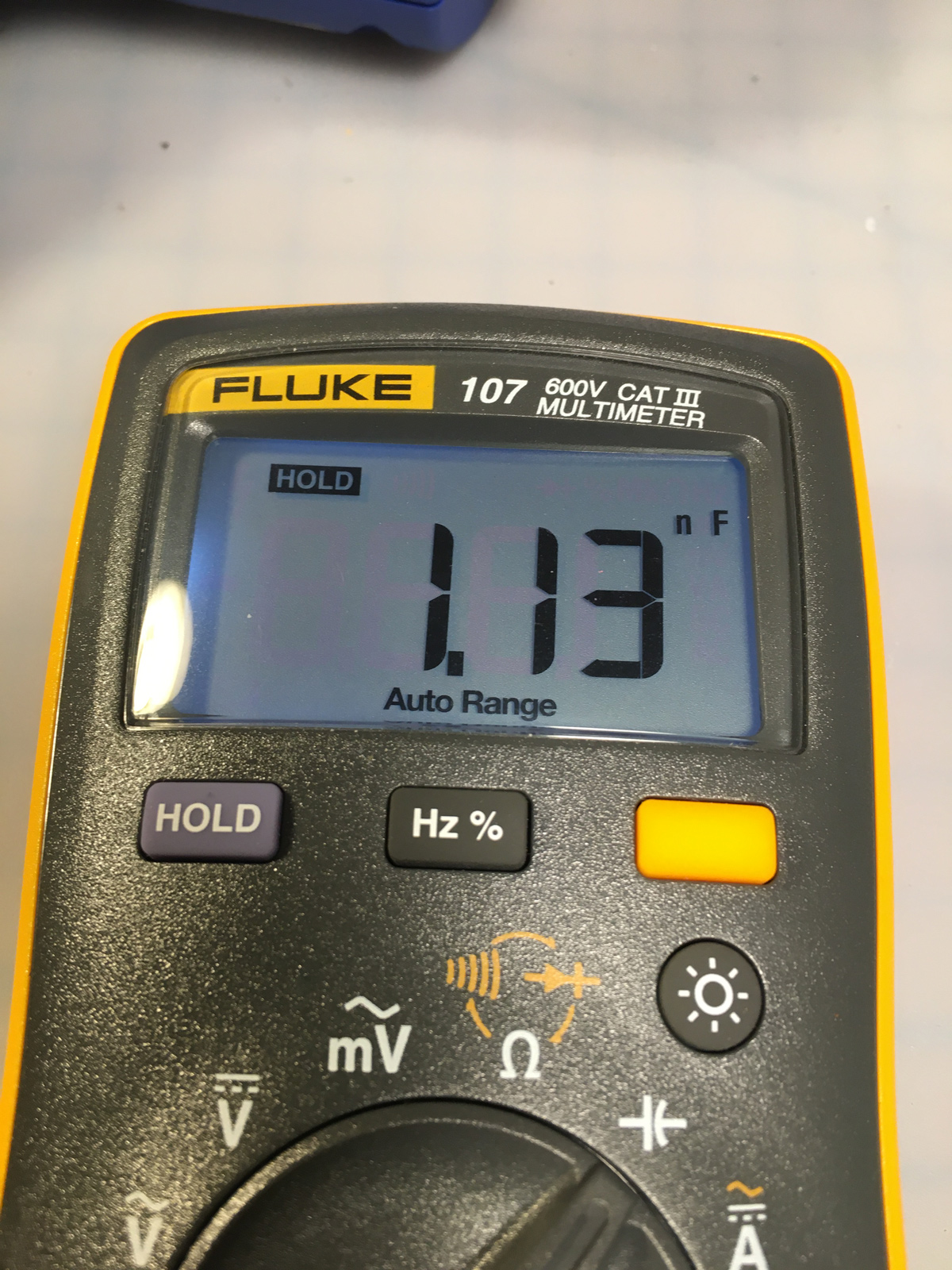 Right, so, C3 and C10 are both replaced, as is R3 and the variable inductor, the heat sink is anchored, the voltage regulator is replaced, the three transistors (not pictured) have been replaced, a re-cap kit installed, the blinding rainbow LED is no more, and the gunk is finally gone. The board is pretty abused-looking in places from the previous mod though, but serviceable. The still-missing R5 doesn't need to be there - the UAV mod picks up its signal on "this" side of it (gesturing with hand, as if anyone could actually see what I'm pointing at): 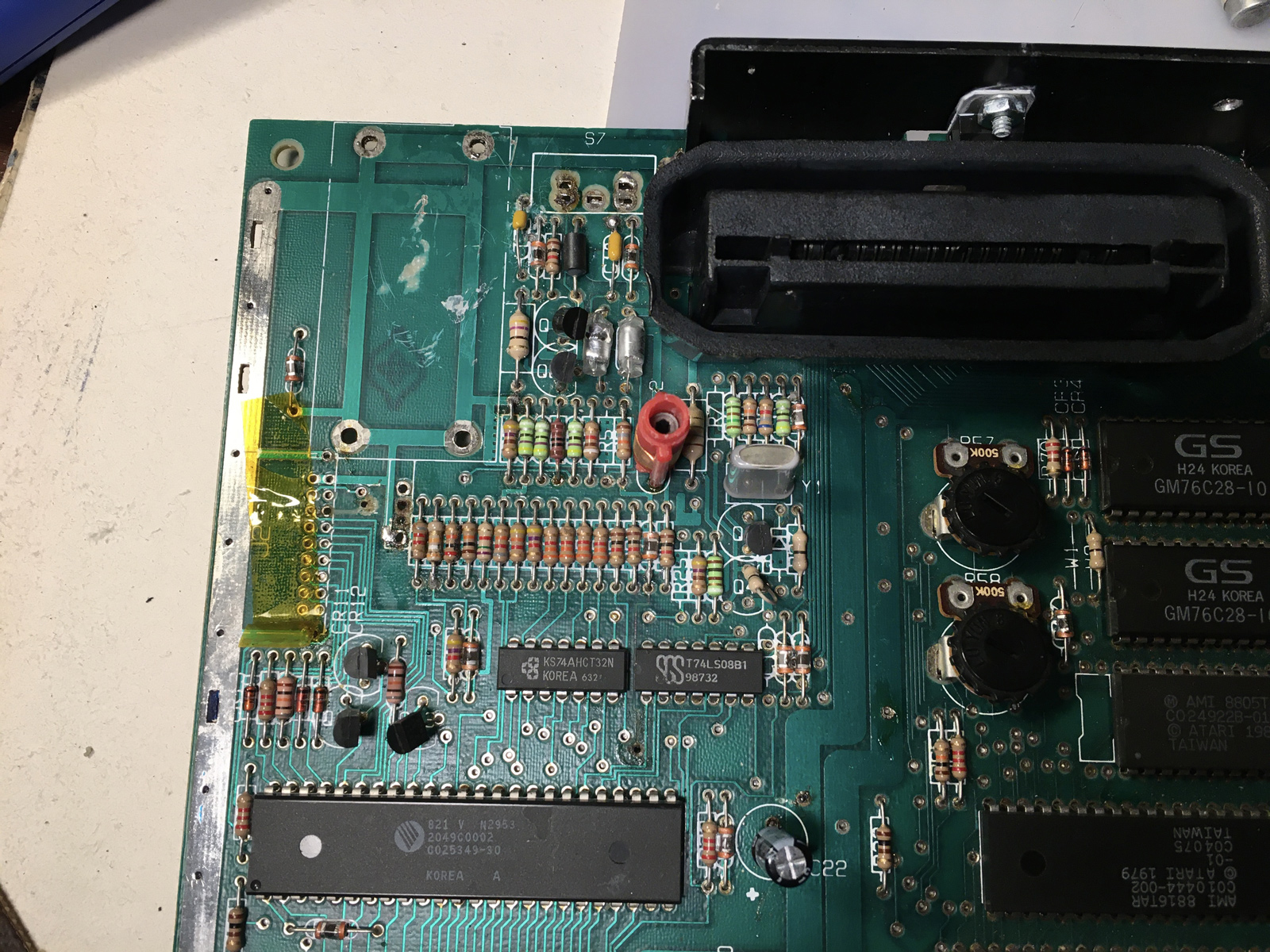 Now then... onto the goodies! At the top are a terminal block and S-video/RCA hookup board I use for testing connections when installing mods. Below that (in the bag) are the Molex connectors I use to connect the mod wiring to the audio/video outputs, so the main board can be removed without being tethered to the video/audio cables (or jacks), or vice versa. Beneath that is... something!

Then the UAV mod (with the unused kit parts off to the right), and below that, my favorite hookup wires, ready for tinning and crimping and stripping and soldering and tangling and cursing. 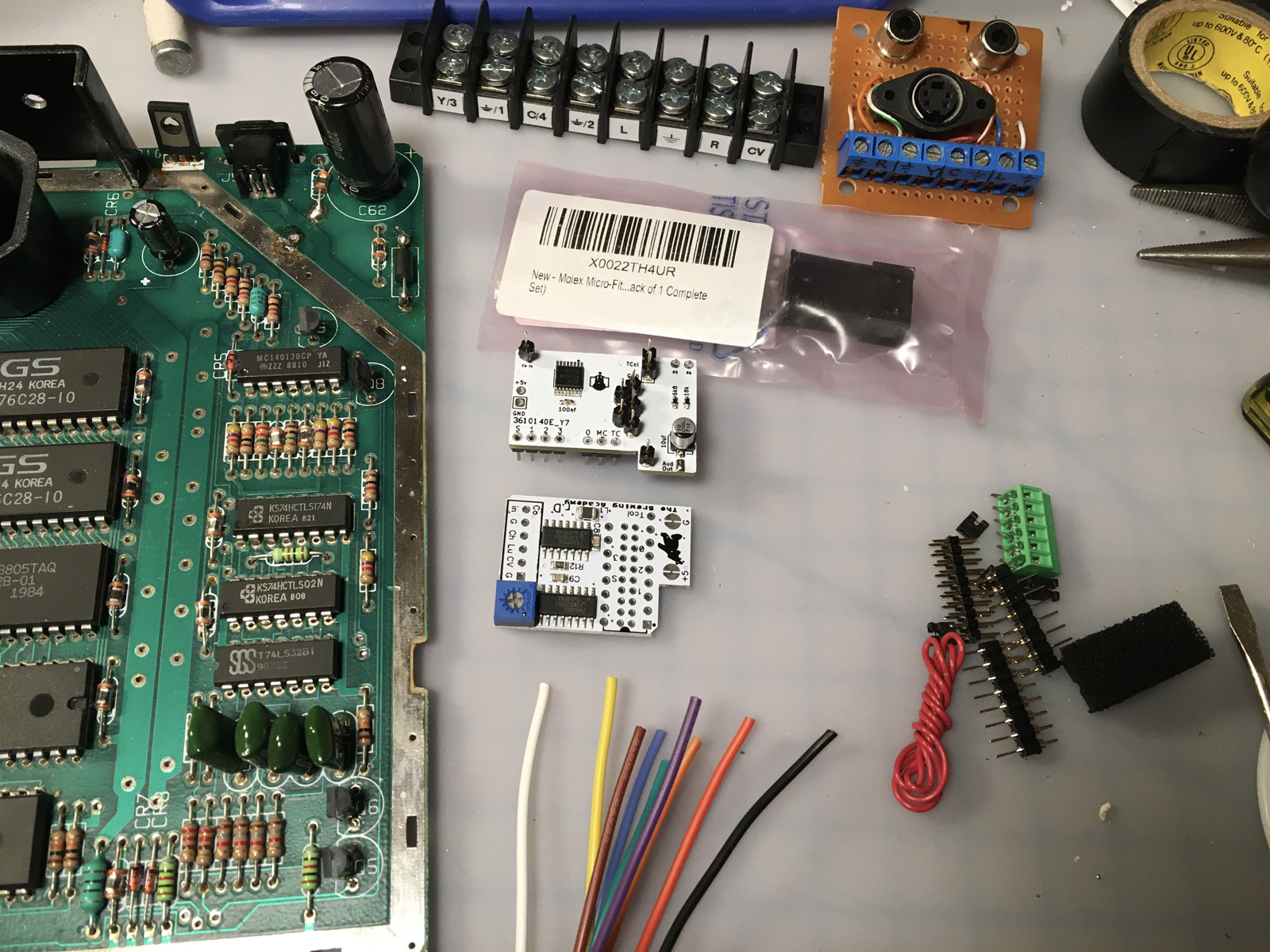 So... just what is that aforementioned "something", and where does it go? Well, it's a new 7800 UAV Mount Board from Ivory Tower Collections. -^CrossBow^- kindly sold me a couple of one-offs for use on this (and my own) 7800. This includes the Chroma Fix circuit, an audio circuit, and provides for a mounting platform for the UAV mod. Just solder it to the legs of the resistors on the board, add power and ground lines, add one UAV mod and some wiring and boom! Done! 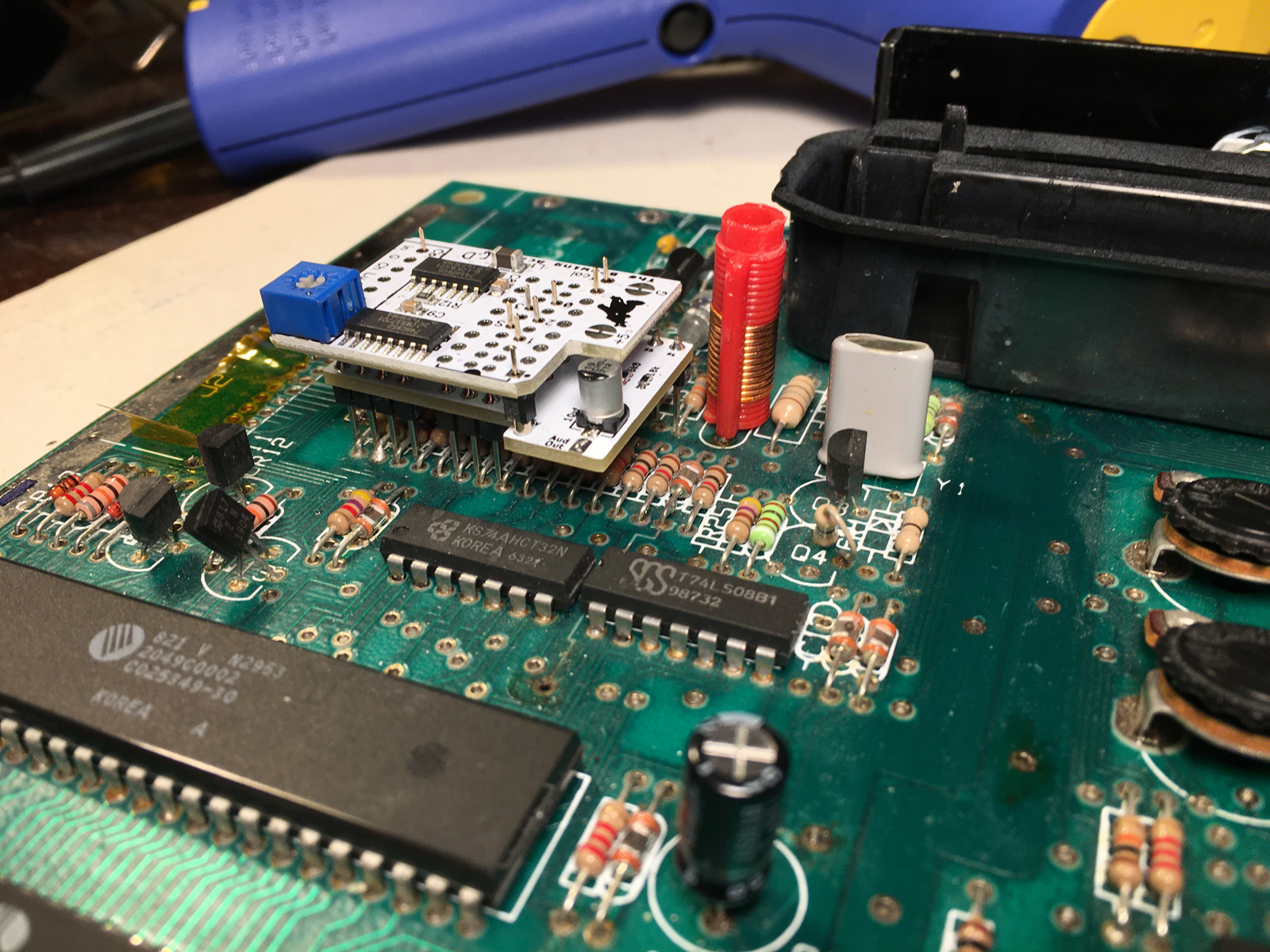 I haven't actually soldered any of this yet. That's next time. But the pieces are here anyway. Thanks Jesse!

Meanwhile, I spent even more money, this time with Best Electronics. One thing that became painfully apparent while testing the 7800 was that my Pro-Lame controllers were pretty-much shot. The joysticks are sloppy to the point of being nearly unusable and the fire buttons aren't far behind. Fortunately, Best has a 7800 joystick upgrade kit. But with required tools such as "two sliding desk drawers", "a chair" and "a cigarette lighter", the installation process seemed a bit sketchy to me. So I ordered a pre-upgraded one instead, before making any such attempt (or spending money) on my old joysticks.

I also ordered one of their new 7800 power supplies. I still have my original 7800 one, which works fine, but I really like the beefier power cord of their new one. Less prone to failure, and at the moment, I'm plugging/unplugging that power supply a lot.

And I also ordered two switches. For something. 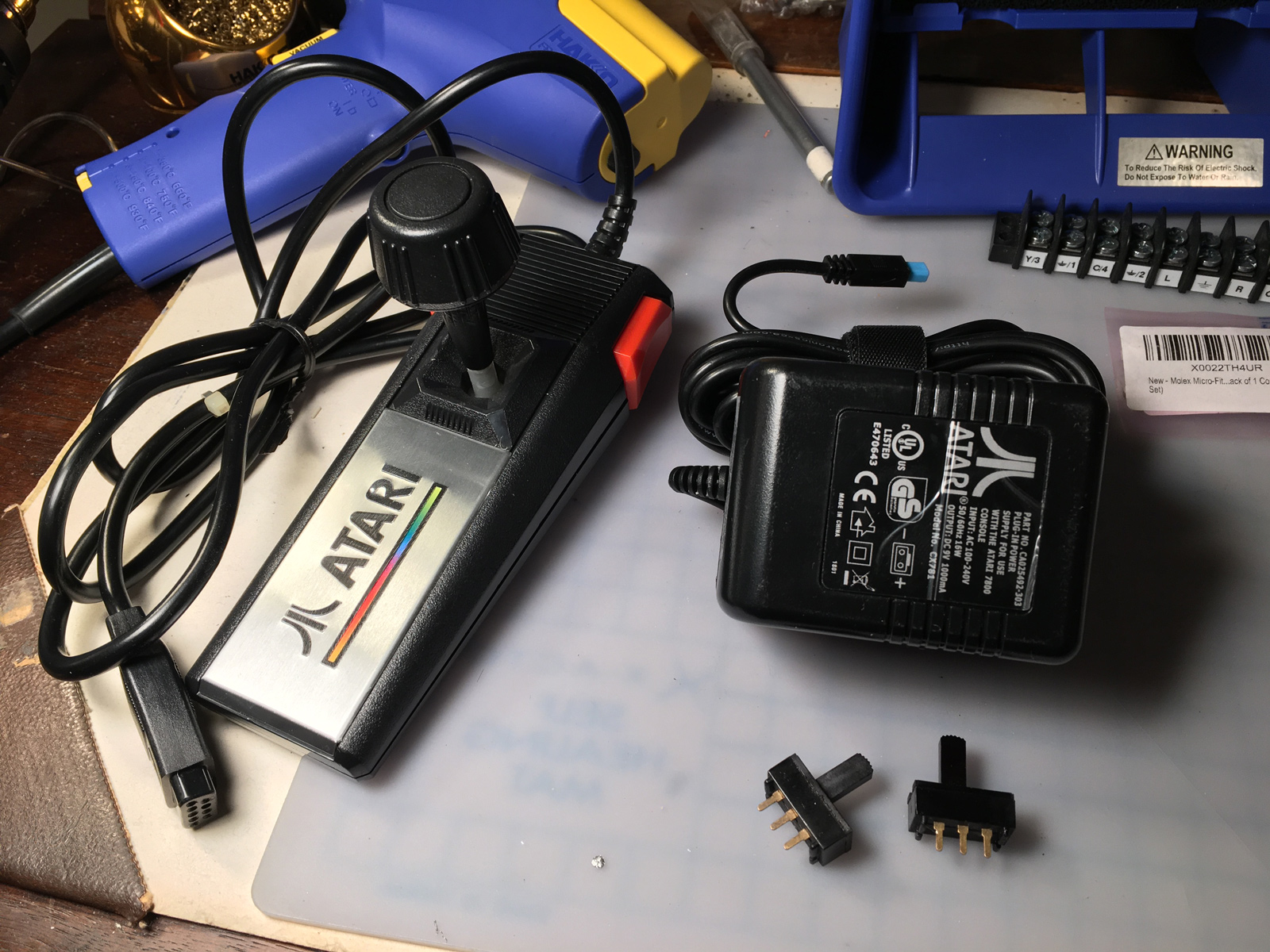 I would've ordered a few more items, but at the moment, you literally can't. Best is so backlogged, they're only allowing you to order three unique items per order. No more. Fortunately, I don't think I need anything else at the moment.

As for this order, I can definitely recommend the new power supply. I really like the build quality of it. But the upgraded Pro-Line controller? Well, there's good and bad.

First, the "good": it probably feels more responsive than these controllers ever did when they were brand-new. I played a few rounds of Baby Pac-Man and a few other games with it, and the Left/Right/Up/Down movement is super-precise. Very tight, accurate, reassuring. And the fire buttons? Well... they work fine. But the problem with the Pro-Line controllers is that the fire buttons are probably located in the least comfortable positions possible for someone to actually use. This is not Best's fault. You can't fix bad design with better switches. That's not the "bad".

The "bad" is, one of the diagonals just simply will not work. Down/Right works great: 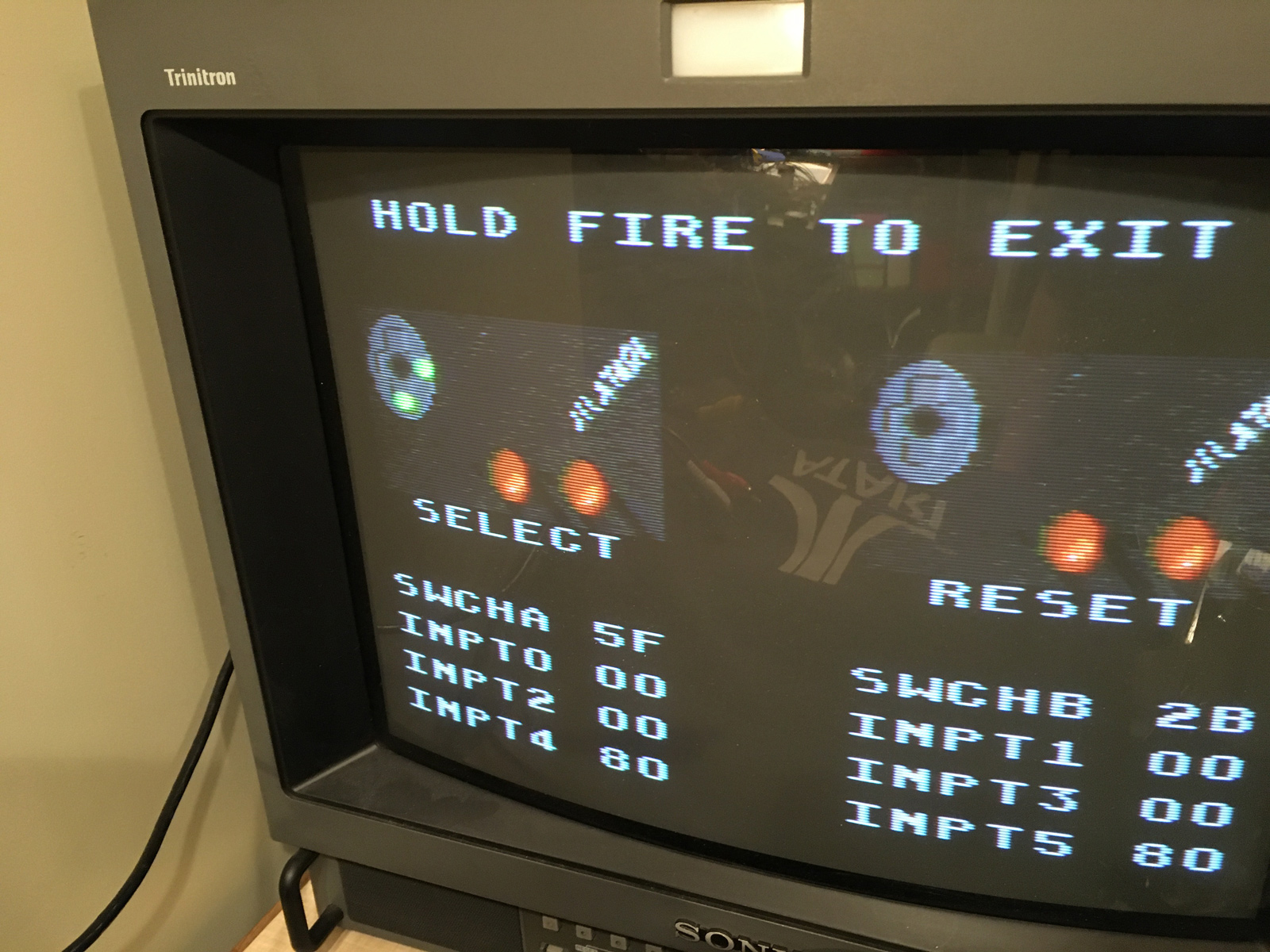 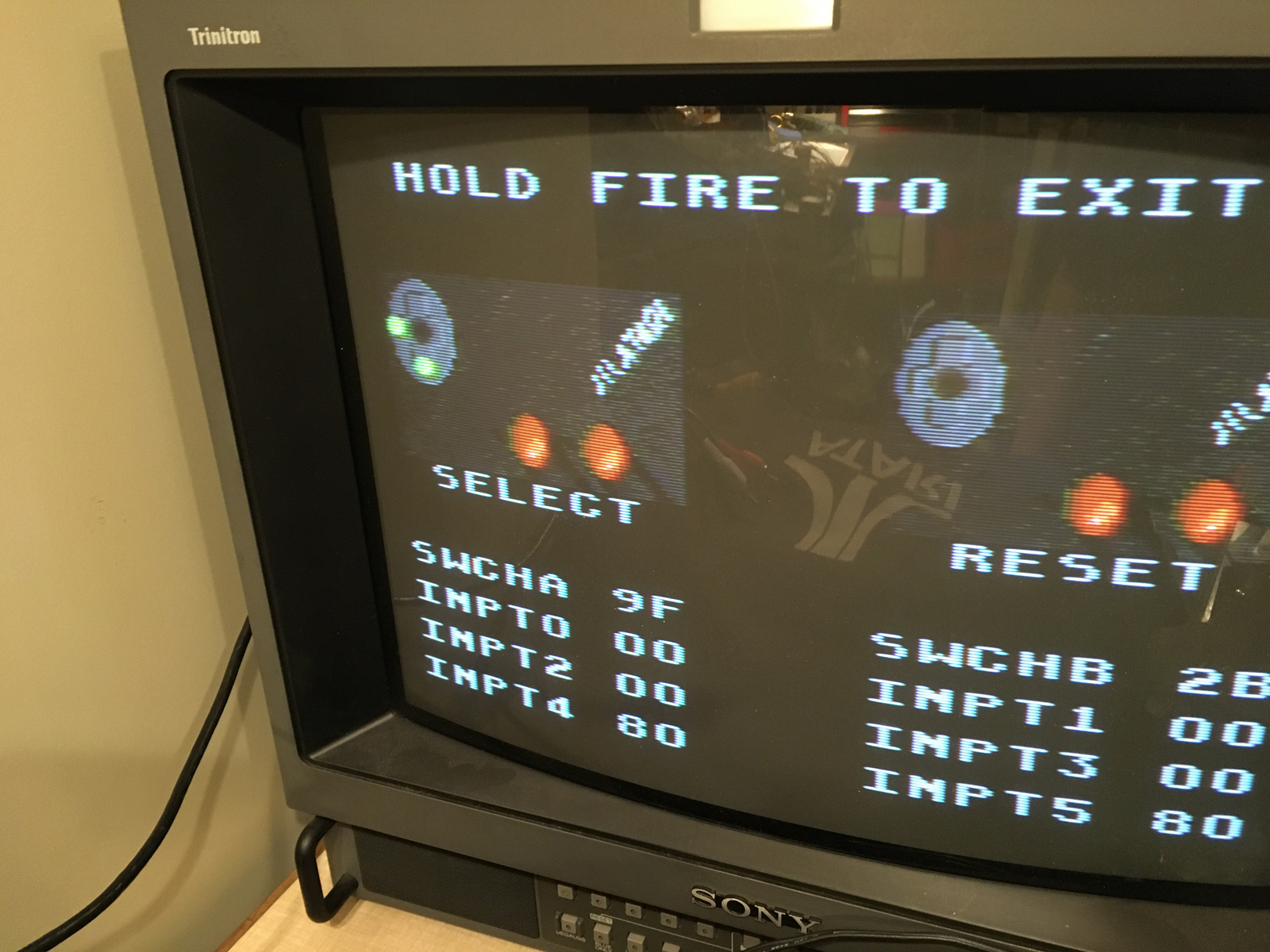 Up/Right... less so. Sometimes it doesn't quite register. But mostly it's fine: 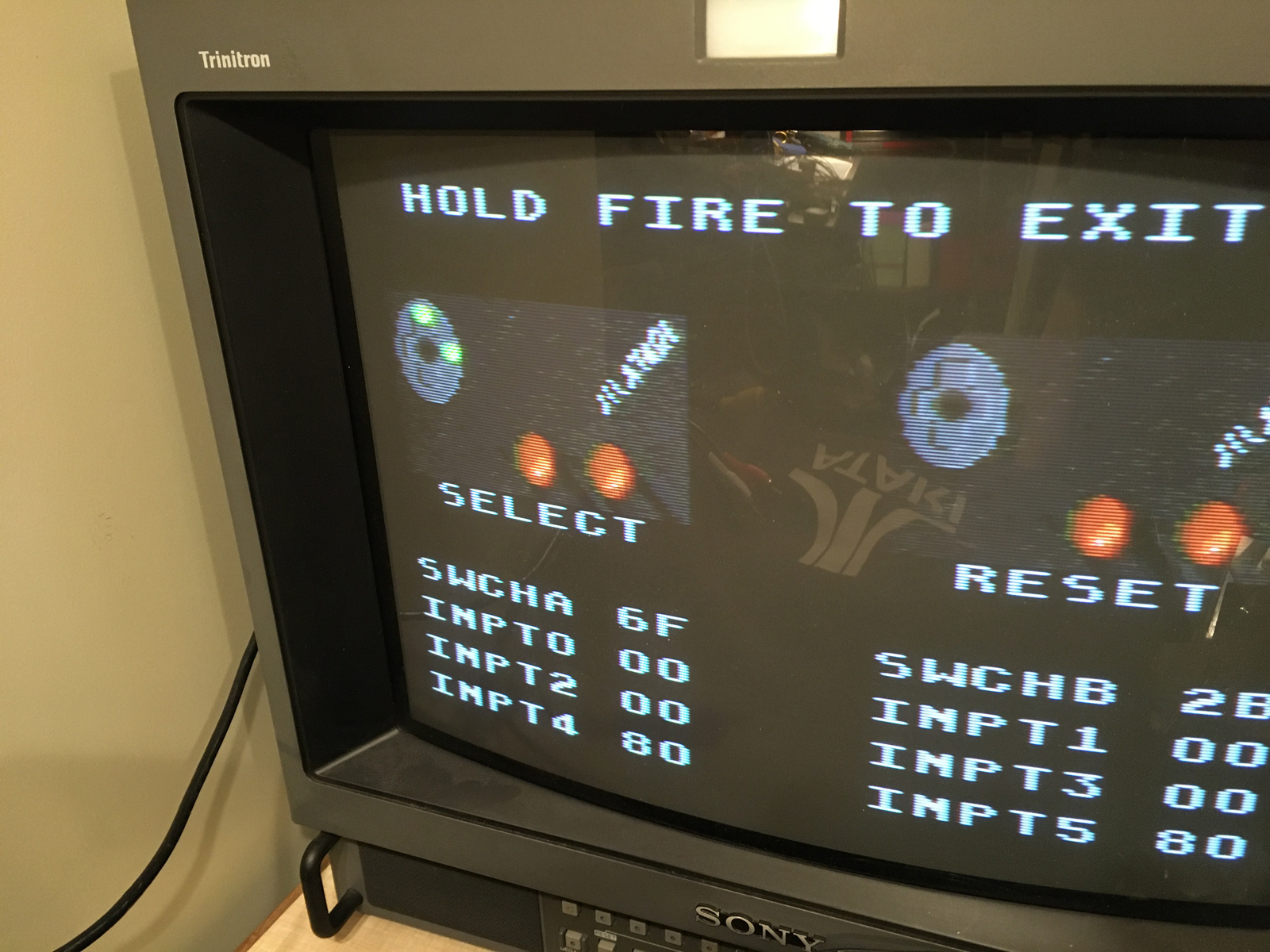 But then we come to Up/Left. It goes from Left... 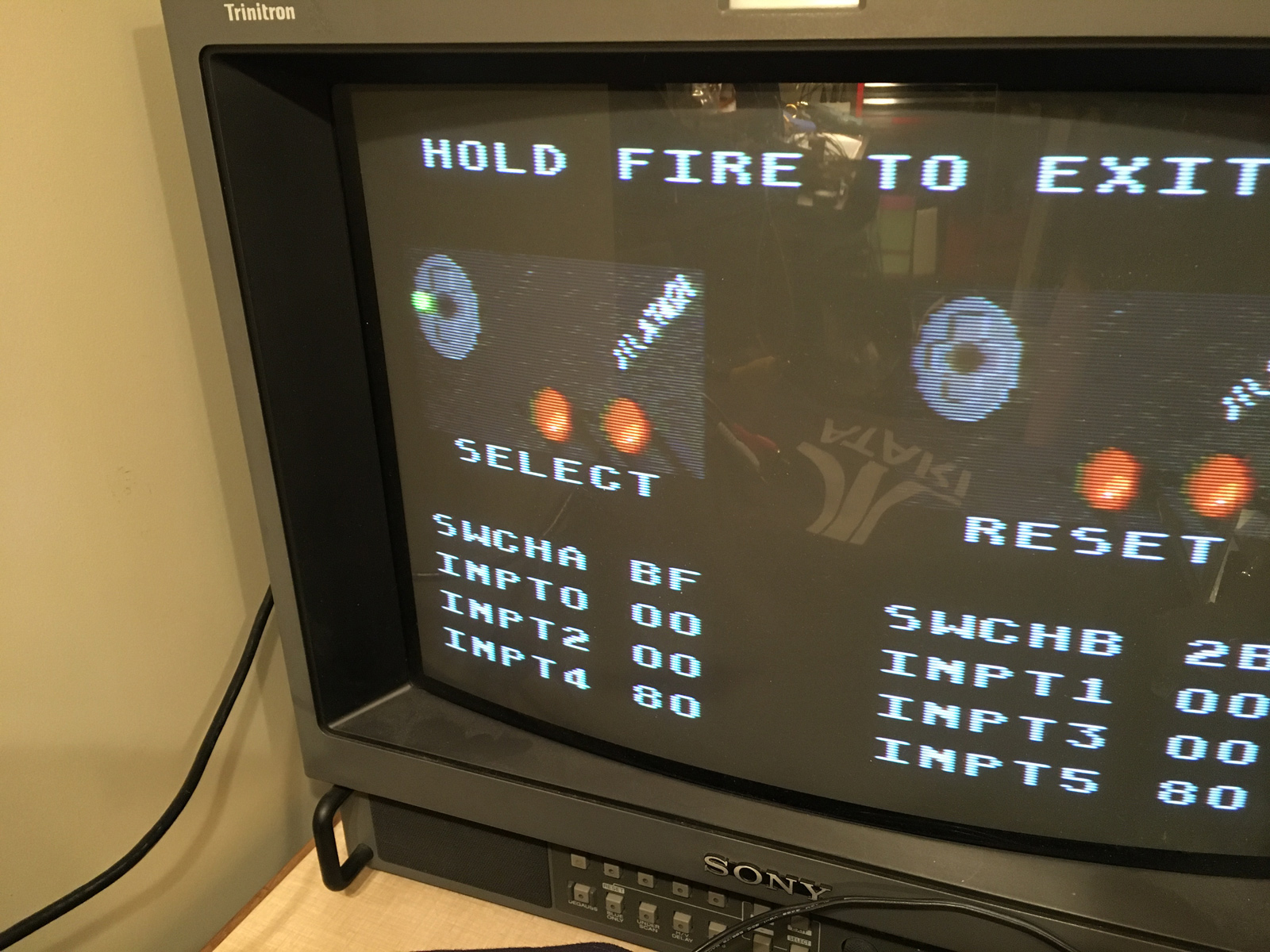 To... nothing. There's a dead zone where the diagonal should be: 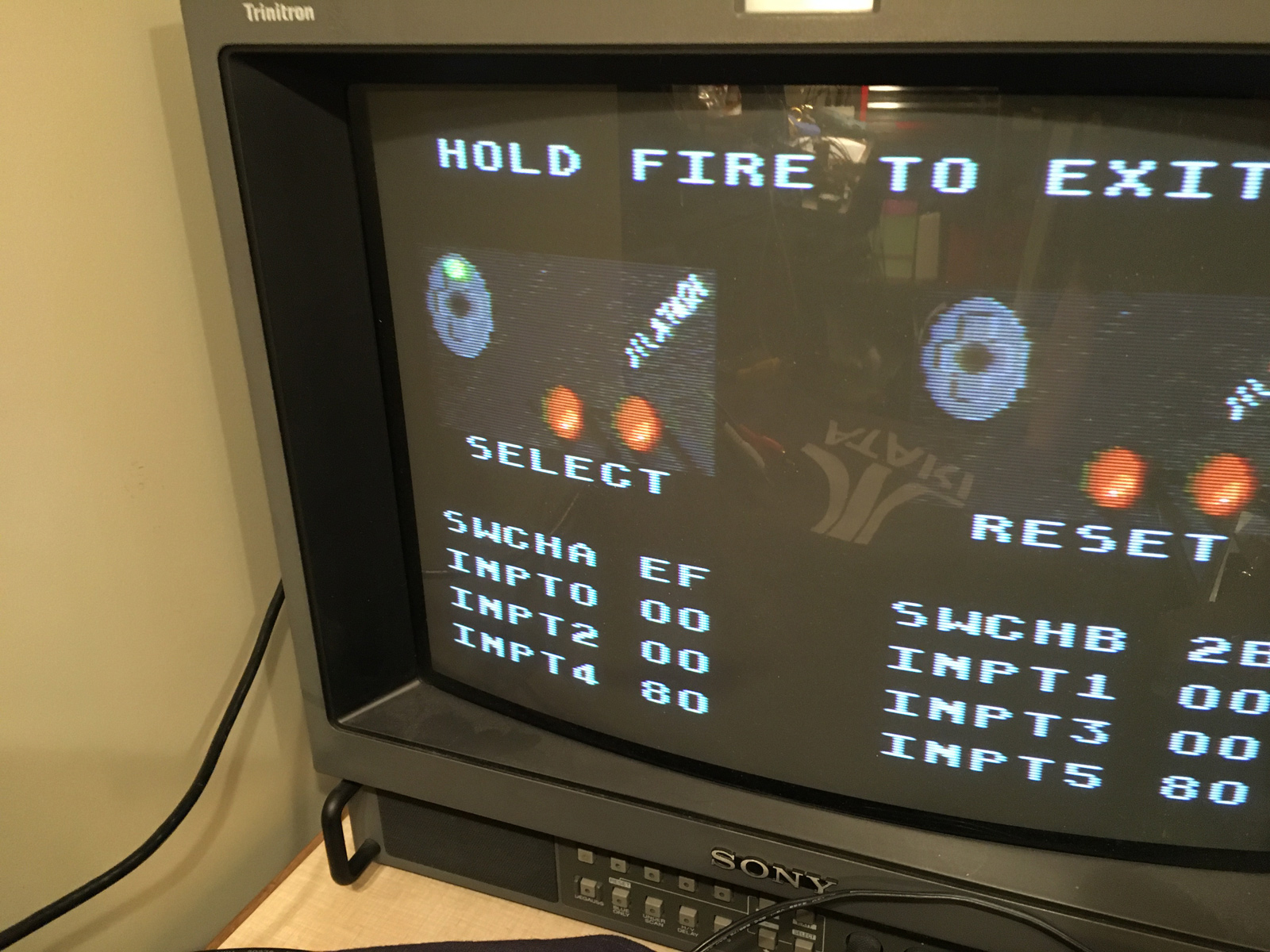 Now, if I press REALLY hard, I can make the diagonal connect, if I angle the joystick just exactly in the right spot. But clearly, this one didn't get tested enough before leaving the shop.