Let's start at the beginning. When I first saw Star Wars in 1977, it was at the UA 150 theater in downtown Seattle. I was too young to drive, so my parents had to take me down there, a 20 mile round trip, to see the movie. Somehow, over the course of the next year or so, I managed to convince them to do that another 10 or 11 times as I saw the movie again and again. It's pretty astonishing now to think of any movie sticking around in first-run theaters for over a year, but Star Wars did it. 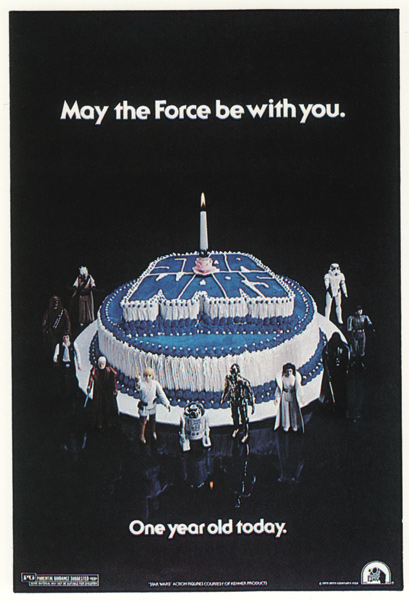 The one-year anniversary poster (from my original The Art of Star Wars).
I remember seeing this as an ad in the Seattle Times back in-the-day.

I will never forget the first time I saw Star Wars. I was in the front row of the balcony when that huge Star Destroyer came flying in over my head - shaking the entire theater. It was an incredible experience, especially for someone whose movie-going experience up until that point consisted of the likes of such Disney fare as The Strongest Man in the World and Herbie the Love Bug Rides Again. I was so overwhelmed by Star Wars, that I can even recall seeing it the second time, and not remembering what was going to happen next. No movie before or since has come close to having that sort of impact on me.

At the time, being a kid, the wait for the sequel seemed like an eternity. Remember, this was before home video, cable TV, or anything even remotely resembling the internet, so the only way to see Star Wars was in the theater, and once it left, it was gone. To fill the gap, there was the infamous Holiday Special (which mercifully only aired once), comic books and toys. There was also the novel Splinter of the Mind's Eye (which I read a dozen times), and The Story of Star Wars record, which had an awesome photo booklet in it. I still have mine.

My original, well-worn, first edition of Splinter of the Mind's Eye. 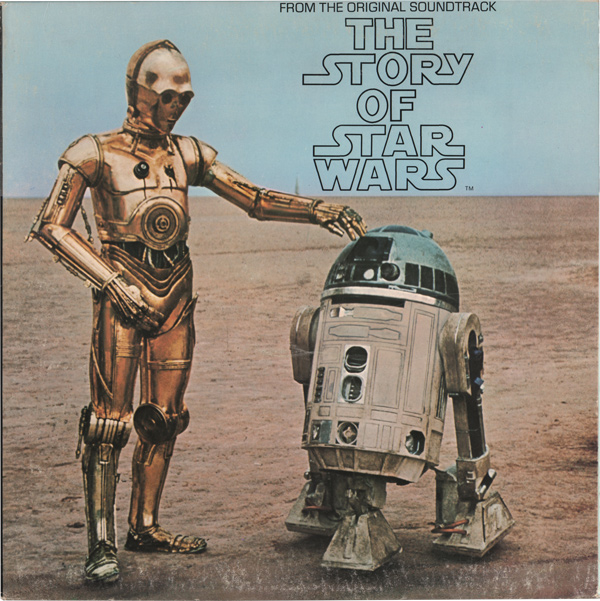 My original LP of The Story of Star Wars. I should listen to it again someday - it's been well over 35 years.

At the time, the only way to get any news about Star Wars was from magazines like Starlog (and yes - I still have my original issues of that, too). It was from articles like this one in particular that I tried to glean every scrap of information that I could about the sequel. Some of the rumors were outlandish, like a holographic Millennium Falcon flying off the screen, or time traveling to Earth's distant past, one had our heroes meeting a Queen of Outer Space*, and another had Mick Jagger composing the soundtrack. But still, anything related to Star Wars was eagerly gobbled up in those interminable three long years before the release of The Empire Strikes Back.

*As an aside, I suspect this might have come from the fact that in the Empire Strikes Back, the Emperor was originally played by an actress. Yep. Look it up.

Then finally, the week that the movie was going to open arrived. I had plans to go see it that Saturday with some friends. The anticipation was unbearable. And on Monday evening, before the film opened, my best friend Paul called me up, and uttered the life-changing words: "The book is out!" 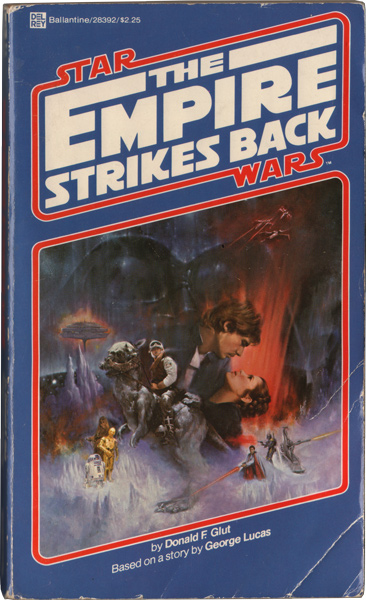 "The book is out." My original copy.

I had to have it. I rushed over to the local Fred Meyer, bought it, took it home and read it cover to cover.

I'm not sure when the regret set in. Probably as soon as I finished reading it. I have no recollection of actually reading it, or what I thought of any of it. All I remember is spending the rest of the week desperately trying to forget what I'd read.

It didn't work. I knew everything that was going to happen, before it happened. When the Mynock attacked the cockpit of the Millennium Falcon, the girl sitting next to me in the theater nearly jumped out of her seat. I didn't even blink. And of course, one of the biggest movie moments of all time was totally spoiled for me. By me.

(And for those of you who got to learn about Darth Vader being Luke's father while actually watching the movie - I envy you.)

No shock. No awe. I never got to experience that singular moment that made Empire such a phenomenal movie, and the favorite of so many Star Wars fans.

Now I still loved seeing Empire. It was terrific fun and powerfully engaging to watch, from the AT-ATs on Hoth to the Falcon's flight through the asteroid field, from the Dark Side cave on Dagobah to the climactic lightsaber fight. The story, acting, effects, and characters were all elevated far above the first film. And while I can qualitatively agree it's the best of the Star Wars films, it's not my favorite. Having been spoiled, Empire lacked the emotional impact that Star Wars had on me. If I'd never read the book, I might have a very different opinion. It certainly would have been a very different movie-going experience. But Star Wars will always be my favorite, because that's the theatrical experience that had the strongest impact on me. Empire will always be second, unless something better comes along.

And so, the hard way, perhaps on the worst film possible to have spoiled, I learned about spoilers.

That's why these are Spolier-free reviews.

Too bad I couldn't have learned that lesson on pretty-much any other film. For example, Star Trek: The Motion Picture would have been just fine. I had been looking forward to that just as much as Empire, but that was phenomenally disappointing, and came out six months earlier. But then perhaps the lesson wouldn't have stuck with me so much.

As an aside, Return of the Jedi was also semi-spoiled for me while I was waiting in line to go see it, when some twit walking out of the theater said,

Thanks for that, jerk-face. But apart from the speeder-bike chase and a certain Princess in a metal bikini, I felt Jedi was essentially a big, Muppety, Ewok turd.** A harbinger, it would turn out, of the next three Star Wars films to come.

**I could go on for a long time about what I disliked in Jedi. But the short list is: every creature except Jabba, the Ewoks, all of the acting, all of the dialog, having the Emperor turn out to be Witchiepoo from H.R. Pufnstuf, the Lapti Nek and Ewok songs, having Darth Vader turn out to be Humpty Dumpty, and rehashing the final Death Star battle from Star Wars because George couldn't come up with a better idea.

Which brings us to Star Wars: The Force Awakens. When I'd heard J.J. Abrams was going to direct it, frankly, I couldn't have been less interested. Despite my initial somewhat positive reactions to his first and second Star Trek films, I found them unwatchable on repeated viewings. The characters were too annoying, and the stories too stupid. I got tired of the laughably bad lens flares, nausea-inducing shaky-cam, and the completely ridiculous technology used to fix gaping plot holes ("red matter" and interstellar transporter backpack, I'm looking at you).

But after a time, and as more Star Wars footage eked out in the trailers, I became more interested. Still skeptical, given the last four Star Wars movies, but willing to give it a chance. So that meant avoiding spoilers. Now, I will give Abrams credit for this: he kept a very tight lid on the film's secrets. While I'm sure plot details could be found if you dug enough, for the most part, they were absent from the mainstream internet and news media. But when showings began selling out as soon as tickets went on pre-sale, I knew there might be trouble remaining spoiler-free. I was going to be traveling around the opening date so I wasn't sure where I'd be able to see it. Even when that was settled, and although we bought our tickets in early December, the earliest date we could get good seats for was December 28th. Sure, we probably could've gotten into a multiplex screening somewhere earlier, but I detest multiplexes, and was determined to see it at a proper movie theater - in this case, The Cinerama in Seattle. Besides it recently having been fully restored into a completely state-of-the-art theater, it also features reserved seating. Well worth waiting a few extra days for, so you know where you're going to sit, without having to jockey in line with a bunch of other theater-goers. Plus, the Cinerama also doesn't run any ads before movies, keeps the trailers to a minimum (in this case, just three), and best of all - before Star Wars: The Force Awakens - they ran the classic Warner Bros. short Duck Dodgers in the 24 1/2th Century. Awesome.

The trick then, was to largely avoid the Internet and media for the ten days from the time movie opened, until I was finally able to go see it. And of course, avoid any jerks coming out of the previous screening who might be blabbing about it.

But in the end, as the lights dimmed, I had successfully avoided all spoilers. So the whole film was going to be a completely new, unknown experience to me. As the movie started, I found myself actually anticipating it. As "A long time ago in a galaxy far, far away..." came onscreen, I felt a twinge of excitement that I hadn't felt since the original trilogy. But would the movie live up to it?

Well then, I guess I should get on to the review.

First, and most important, I did have fun watching it. The Force Awakens felt very much like the original trilogy, and was much better than any of the prequel trilogy. And although that may not be much of a feat, I also felt it was better than Return of the Jedi. (But note my opinions regarding ROTJ, above.) But it certainly wasn't a perfect movie.

So here are a few of the things I liked:


That said, there are certainly things that I didn't like:


In the end though, I enjoyed seeing Star Wars: The Force Awakens. I walked out of the theater looking forward to the next film. And although I think that's a good thing, it could be considered a knock against the film, too. I think (or hope) that the sequel will actually be the new Star Wars we're looking for. This was a welcomed reintroduction back into the franchise, but it isn't the heart of the story. Not yet. There were certainly some great moments in The Force Awakens, but also plenty of weak ones. I was in a packed theater, and while there were a few cheers or smatterings of applause here or there, there was never any one moment where the whole audience went absolutely nuts. Star Wars needs "that moment" again. It's not here. But it was still a fun movie to watch. If that's all you expect going into it, you'll do just fine. I went in expecting nothing, so I came out ahead.